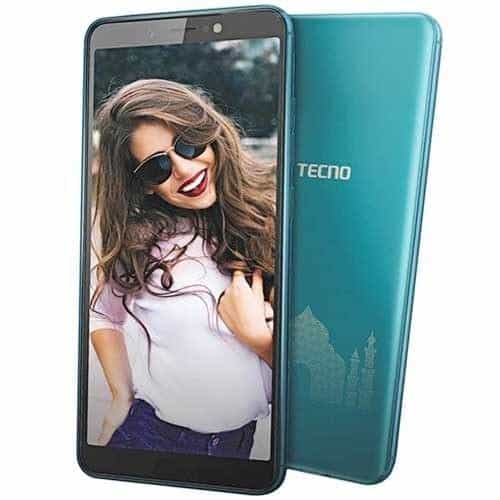 Today we will be in-depthly reviewing the new smartphone and the various specification and features. We will also see some of the reason why you should either buy the smartphone or consider a different one. Without any further ados, let’s get straight to the full review in proper.

The design of the Tecno Camon iACE 2 is nothing out of this world, it is just the conventional design we see in normal phones. To begin with, the smartphone body is made of plastic, while the frames are aluminum.

On the top left side of the back of the smartphone, you will find the dual camera sensors, and a LED flash all vertically positioned. The smartphone can comfortably fit inside your palm or pocket due to its bar-shaped body. The smartphone also has a width of 71.9mm and weighs a reasonable 150g.

The smartphone didn’t feature the dew-drop design for its single selfie camera which can also be used for face unlock. Apart from the selfie camera, you will still find other components like the speaker grill, proximity sensor at the top bezel.

Should in case you want to purchase this device it’s important we make it known to you that the smartphone only three color options which consist of theCity Blue, Midnight Black, and Champagne Gold.

If you are a Tecno fan, you should know that the Camon series centers on cameras, so we don’t expect less. At the back of the smartphone, you will find dual camera sensors which consist of a 13MP camera with an f/1.8 aperture and another 0.3MP camera for depth sensing and portrait photos.

The dual primary cameras come prepaid with the dual-LED flash which helps to take decent pictures even in low-light conditions. The primary cameras also come equipped with panorama, HDR, and you can also record videos of 1080p at 30fps.

Meanwhile, the front of the device also comes with a single camera sensor which is an 8MP sensor with an f/2.0 aperture and can also be used for Face Unlock.

To begin with, with, the Tecno Camon iACE 2 uses the company’s (Tecno) HIOS 4 which is based on the Andriod 8.1 Oreo Operating System.

There is also the presence of the Mediatek Helio A22 mobile processor which oversees the day to day performance of the Tecno Camon iACE 2. The chipset runs at 2.0GHz and also has the assistance of the PowerVR GE8320 GPU which has proven to handle high-end graphics.

The Tecno Camon iACE2 uses a 2GB RAM which helps for processing files and multitasking purposes. For the memory aspect, you are presented with a 32GB internal storage which can be further expanded up to 128GB via MicroSD card.

For the network and connectivity, you have the 4G LTE, Wi-Fi 802.11 b/g/n, hotspot, and other regular networks. The Tecno Camon iACE2 also supports the MicroUSB 2.0 port and Bluetooth v5.0.

The Tecno Camon iACE 2 features a Non-removable Li-Po 3050mAh battery which powers the whole smartphone. The moderate battery can take you through several hours of web browsing, music playing, video gaming, and more.

Despite offering you a reasonable amount of hours with moderate usage, if you engage in heavy usage, then be prepared to have your charger around. The battery does not support wireless or fast battery charging.

If you think this smartphone will suit you and will be able to perform all the task you throw at it, then you can go ahead and purchase it. The smartphone is sold for just $89 which is equivalent to N30,000 Naira, though the price sometimes is a little bit influenced by the deal and location.

The smartphone is already available and can be bought from some online stores or you can decide to purchase it from any authorized Tecno dealer near your location.

To be sincere, the Tecno Camon iACE 2 does not features those eye-catching and trending specs that we see these days on flagship phones. The smartphone does not come with the triple rear camera, dew drop notch, and other trending features.

Despite not featuring most trending features, yet, you can still find other interesting features such as dual cameras, single selfie camera which also serves as Face unlock, dual-LED flash, and more. The smartphone also arrives with an affordable price tag and can handle normal everyday tasks thrown at it.