The Tecno Pouvoir 4 Pro was able to take things up a notch. It comes with a more premium package than the standard Pouvoir 4. The pro version was able to bring in more RAM, a faster processor, larger storage and so much more. 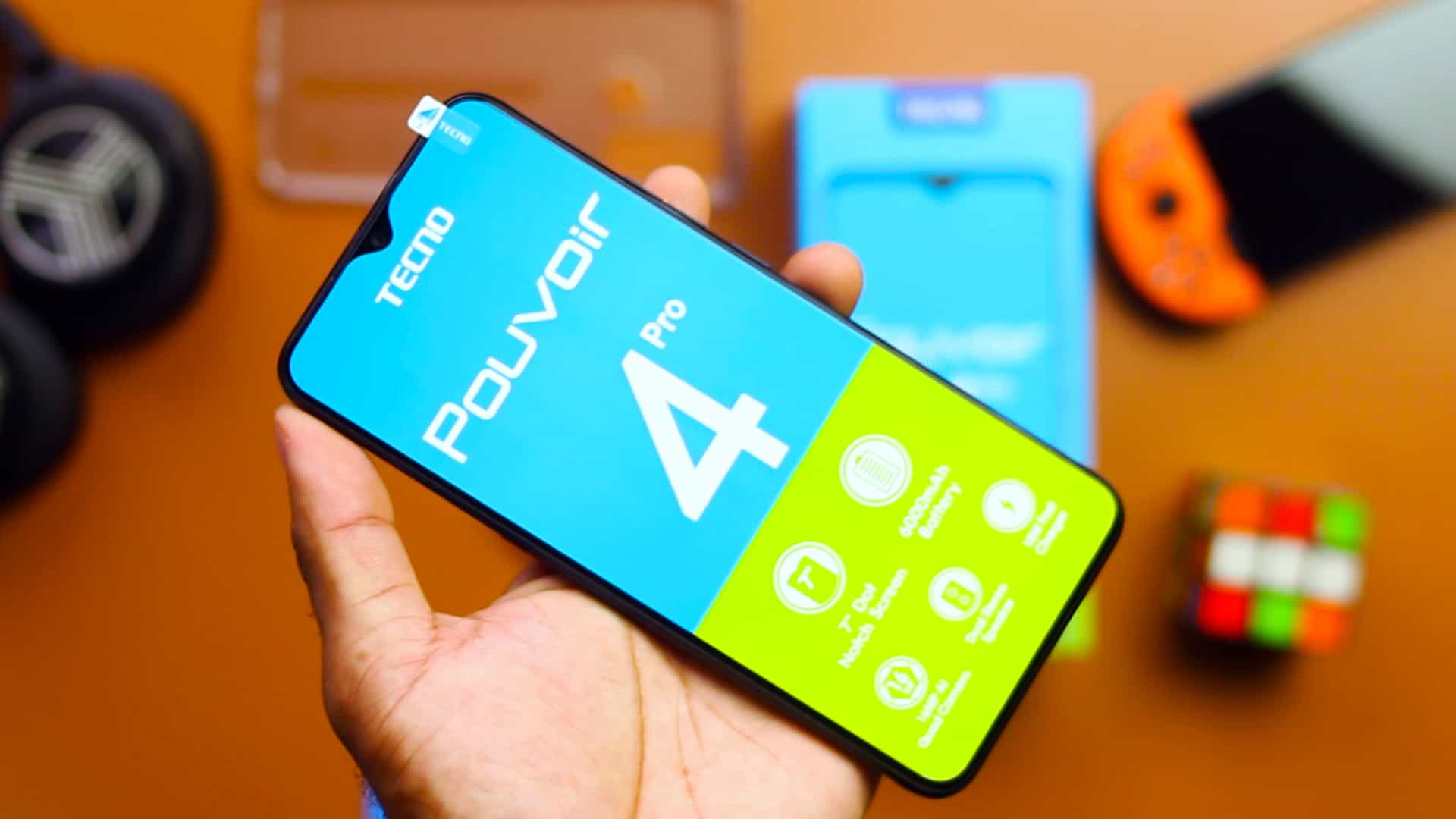 This page contains a full review of the Tecno Pouvoir 4 Pro – The specifications, features and price. This page will show you the good side of the Pouvoir 4 Pro as well as the bad side – It will help you make your purchasing decision.

You can decide to either stream our Video Review of the Tecno Pouvoir 4 Pro which is below. Or you can better still, continue reading. If you like our video, then check out our YouTube Channel where you will find other interesting videos of me and my team reviewing lots of new phones that just hit the market.

For all those who have made up their mind to continue reading, below is our full handwritten Tecno Pouvoir 4 Pro review. Let’s see all the good and bad stuff the Pouvoir 4 Pro has to offer.

The unboxing of the Tecno Pouvoir 4 Pro left me with no surprise because I’ve already seen the same kind of packaging in the standard Tecno Pouvoir 4.

The box itself is coated with a strong plastic nylon which you must rip apart in order to access inside the box. After that is done, the first thing you find in the box is the Pouvoir 4 Pro accompanied with a cover which highlights some of its features.

Moving on, you find other items in the box which includes Protective Cover, a Charging Brick, a MicroUSB 2.0 cable, an earpiece, and the User Manual.

The Tecno Pouvoir 4 Pro which happens to be the successor to last year’s Pouvoir 3 Plus, shares lots of features in common with the standard Pouvoir 4.

The Pouvoir 4 Pro still maintains the same 7.0-inch dot notch screen which gives you a huge exciting gaming and video streaming experience. It also allows you to be immersed into various stunning video effects.

Just as the standard version, the Pouvoir 4 Pro also arrived with a plastic finish at the back. Nevertheless, I think it was intentionally done to cut down the cost of production which I think is fair considering the price of the device. Still at the back of this device lies the much talked about quadruple-camera lenses.

You will find the dual nano-SIM tray on the left side of the Pouvoir 4. It is seated above the of the phone personal assistant button which doubles as a google assistant launch button.

Meanwhile, the right side of the smartphone holds the volume rockers as well as the power button below it.

Beneath the Pouvoir 4 Pro lies the headphone jack (3.5mm jack), microphone, MicroUSB 2.0 port, and finally the speaker grill. Finally, this smartphone comes in three different colours which include the Ice Jedite, Misty Gray, and Purple.

It seems big size display is the new 2020 thing for both Tecno and Infinx (They recently launched the Infinix Note 7 & Hot 9 both featuring 7inch display).

The colour reproduction and the 480nits brightness of the Pouvoir 4 Pro was also satisfying when considering the price at which it is offered.

The chipset running in the heart of the Tecno Pouvoir 4 Pro is an octa-core Mediatek CPU clocked at 2.0GHz, the Helio P22 chip, and also slapped with the PowerVR GE8320 GPU. The chipset is not really new and it’s often compared to the snapdragon 625.

Tecno Pouvoir 4 Pro still retains the software formate of the standard version. You still get the same HIOS 6.1 user interface which runs on the latest Android 10 operating system.

There’s enough internal memory to handle all your basic storage needs. You are presented with a 128GB internal storage and a 6GB RAM. If you think there’s a need to expand the memory, you can further expand it up to 256GB using an SD card.

The device still has other interesting things such as the rear-mounted fingerprint sensor and the FaceID which allows you to properly secure your smartphone.

But luckily, unlike its predecessor, the Pouvoir 4 Pro arrives with a Fast battery charging 18W Technology – It’s a good thing, I must say.

The camera array on the Tecno Pouvoir 4 Pro are not the same with the standard version, though both come with the quad rear camera setup.

Both the selfie camera and the main camera at the back of the Pouvoir 4 Pro were improved. The selfie camera now features a powerful 16-megapixel Punch hole camera sensor and still retail the Dual-LED flash.

Remember that the Pouvoir 4 Pro is also a mid-range smartphone featuring little difference from the $140 standard version.

Tecno Pouvoir 4 Pro price starts at around $168, which is approximately 65,000 Naira in Nigeria. Meanwhile, the device is sold for about 968 Ghana Cedi and 17,816 Kenyan Shillings.

Just like the standard Tecno Pouvoir 4, the pro version will also be expected to go on sale in early June 2020.

Both the Tecno Pouvoir 4 and the Pouvoir 4 Pro looks like a device we have already seen – It’s more like a copied assignment.

As a matter of fact, I see the 16-megapixel featured at the back of the Pouvoir 4 Pro as a downgrade as compared to last years 32-megapixel on last year’s Pouvoir 3 Plus.

Nevertheless, the fast battery charging technology and other amazing specs featured on the Pouvoir 4 Pro makes it worth trying.