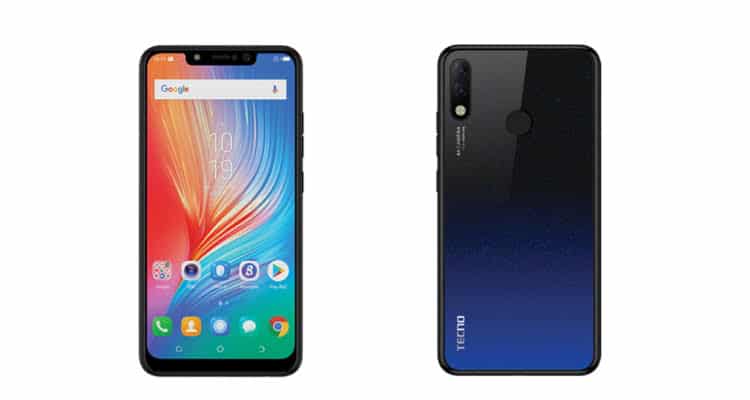 The Techno Spark 3 Pro is also the sequel to the Tecno Spark 2 Pro which was released by this time last year. The Tecno Spark 3 Pro comes along with most of the interesting features and specifications that its lower version didn’t come with such as the 4G LTE, larger storage option and others which will be mentioned in the course of this review.

We wouldn’t want to take much of your time neither do we want to waste any of our own, so let’s get down straight to the business of the day.

Still, on the bottom near the Tecno logo, you will find the micro USB port, a mono speaker, a 3.5mm audio jack, and the single microphone.

When you turn over to the front side of this smartphone, you will find the dominating 6.2-inch HD panel that arrives with a resolution of 1500 x 720 Pixels which is great for web browsing, video watching, and other multimedia contents. The general performance of the screen is great, though there was no full HD screen.

The bezels by sides of the screen have been greatly trimmed alongside the chin. Meanwhile, on the top of the screen, you will find the iPhone cut-out notch that accommodates the single selfie camera, an earpiece, and the proximity sensor.

The camera of the Tecno Spark 3 Pro is awesome and you can take images with many details. The cameras on the smartphone are three in number, one single selfie camera and the dual camera sensor at the back.

The camera on the front which is housed inside the notch and takes great detailed images is an 8-MegaPixel selfie camera. Meanwhile, on the back of the device, there is a dual camera setup which consists of a 13-MegaPixel and a 2-MegaPixel camera sensor.

There is no-frills experience on the device camera app which includes AI Cam, video, toggles for flash, bokeh and beauty HDR placed on the top layout. You will be able to take good images with the Tecno Spark 3 Pro and post it on your social media accounts, though it struggles in low light conditions.

The Tecno Spark 3 Pro arrives with the MediaTek MT6761 Helio A22, Quad-Core 2.0GHz processor that ensures the day to day task by the smartphone is carried out with little to no lag during a performance.

When playing conventional light games, the smartphone will respond and perform very well, but on the other hand, large graphics intensive games and other RAM-intense apps usually don’t run smoothly because you may some times experience some lags and some times the smartphone overheats though not to the annoying extent.

One good thing that we appreciate about the smartphone is the ability to further expand the memory should in case the internal memory is not enough for you. The memory can be expanded up to 32GB via a microSD card. The overall performance is really okay when you put the price tag which the smartphone arrives with.

One of the places the Tecno Spark 3 Pro has a strong point is also in the battery section. The smartphone features a 3500mAh battery which is sure to serve with more hours than its predecessor.

The battery of the smartphone can get you through the day even with heavy usage. We tested the battery and it was able to still give us 12 percent by the end of the day. Just like the Tecno Spark 3, the Pro was not able to feature either the fast charging technology or the wireless charging, though you can charge from 0% to 100% under one and a half hours.

Should in case you want to purchase one of this smartphone for either your family member or your loved ones, then you can buy it from some online stores like Jumia, Konga, and others. There are some other offline stores around your region where you can purchase this device.

The Tecno Spark 3 Pro might have been able to arrive with many interesting features, nevertheless, it also has some of the features in which it needs to work on. Some of the reasons why might need to keep this smartphone in your possession include nice camera experience, large RAM for smooth multitasking purposes, and nice battery which offers you a reasonable amount of hours.

Meanwhile, some of the features in which needs to be worked on the smartphone include the UI which needs to be a little bit polished and though the RAM may be okay for some persons, it still needs to an additional extra gig in order to make outstanding among its peers.