We present to you another low budget phone from one of the biggest mobile phone manufacturers in Chinese, Tecno. 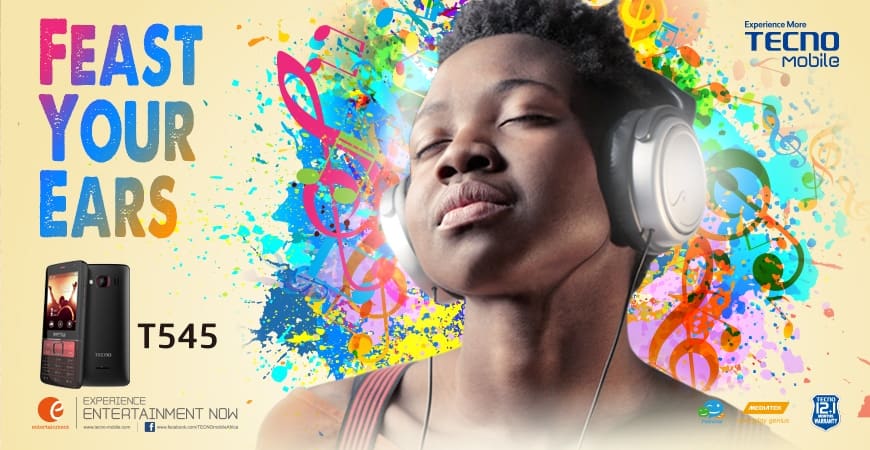 Tecno decided to roll out another low price feature phone into the mobile market, we already know them to be good at dishing out low-price phones, so, it’s not something that is new to us.

Without wasting much of your time, let us jump straight right to the various selling points of this new device called the Tecno T545.

The Tecno T545 is a low budget Tecno feature phone that comes with some exciting features like a 2.8? QVGA display screen, a crystal clear live sound, and this is all thanks to the professional audio technology employed.

The phone also comes along with a very powerful dual camera, that sure to make it easy for you to save those memorable moments and share them with your loved ones or friends on social media. With the combination of both sharp dual cameras and clear sound, you’d have in possession a complete entertainment center in your hands.

The newly released device arrives with a plastic body build. At the front of this device, you will see a classic keypad seated below the screen. While at the back of this device we have the primary camera positioned at the center of the upper region, and on the left side of the camera is a flashlight and on the right side of the camera, you get loudspeaker all in a row.

Also at the back of this phone, you will see the company’s logo embedded close to the bottom of this device.

At the right-hand side of the Tecno T545 we have the volume rockers and at the bottom of this device, you will find the charging port of this device. This phone also brings along the 3.5mm jack.

The T545, ships with two cameras which is the secondary and primary camera at the back of this device. The back camera which is the primary camera has a 0.3 MP, with an image resolution of 1600 x 1200 Pixels and a Flashlight next to the camera. The camera also comes with a Digital Zoom feature.

Meanwhile, the front-facing camera, also arrives with the same 0.3 MP, just like the primary camera, but it doesn’t have a Flash.

Down to the performance section of this device. The Tecno T430 runs on the MOS Operating System 8MB RAM and a 16MB ROM just like the Tecno T430.

One good thing is that the internal 16MB storage can still be expanded up to 32GB Via a Micro SD card.

The phone also comes with some pre-installed applications like Opera Mini, Facebook, Palmchat, Wireless FM Radio, JAVA, Dual SIM, Dual Standby and Excellent Hi-Fi Music. There other things that it also comes along with like the Calculator, Converter, World clock, Calendar, and Alarm.

The Tecno T545 houses a battery capacity of 1200 mAh Li-Ion Removable battery. There is nothing like a wireless or fast charging because most people can be too demanding, this is just a feature phone and not a smartphone.

The Tecno T545 price tag ranges from ?4,000 to ?5,700 in Nigerian Naira and is available on Konga, Jumia, and other Offline stores like Tecno phone major distributors and most online shopping malls.

The Tecno T545 is another low budget phone that provides you with both exciting entertainment features, while still serving as a phone. It comes with other dope features like the front and back cameras, etc. Overall this phone is okay.