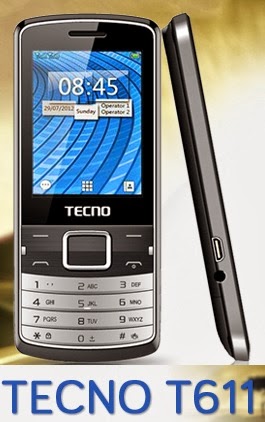 The TECNO T611 was announced on June 2013 and it comes equipped with many nice specifications like the high definition screen with IPS technology, coupled with a nice camera, and an enhanced social networking experience with lots in-built SNS apps and the device also comes with many entertaining free Gameloft games.

Just keep reading to see all the selling points of this new device from Infinix.

By the left side of the TECNO T611, you will find the charging port and the usual 3.5mm jack, those are the only things found at the left-hand side of this device. While, at the front side of this phone, you will see just the screen and the Classic keyboard in their normal positions.

The TECNO T611 arrives with three color options, the White, the Black and Ash color.

The TECNO T611 houses a 2MP, up to 1600×1200-pixel pictures camera coupled with a LED flash all located at the back of this device. The camera is also capable of recording videos of 640×[email protected]

Down to the selfie camera section, but unfortunately, you will not be able to take selfies with this device because it didn’t come with a front-facing camera AKA selfie camera.

The TECNO T611 runs on the MOS Operating System and also ships with the N/a Processor. This new device also arrives with a 64MB RAM that is assisted by a 128MB internal storage, which can be expanded up to 32GB.

The TECNO T611 houses a 1000 mAh Li-Ion battery, which the company claims could afford you with 5 hours  18 min of talk time and 160 hours of standby.

The body build of this device is made of plastic, so I hope you don’t start expecting it to come along with a wireless charge technology.

The TECNO T611 is a nice feature phone that could serve as an assistant to your smartphone. It arrives with the normal specs like other phones of its range. And one good thing about this phone is its ability to accept an external MicroSD Card for storage expansion.