Chinese smartphone producers, Vivo has introduced their latest smartphone under their S-series. The name of the new smartphone is tagged the Vivo S1 Pro, which happens to be a follow up to the Vivo S1 that was released earlier this year. 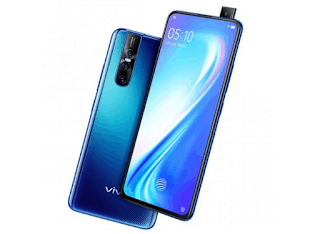 The Vivo S1 Pro was announced in May and will also be released in the same May 2019. The new device which happens to be an upgraded version of the Vivo S1 comes in with advanced features than its predecessor.

The new smartphone now comes with a huge storage, alongside a massive RAM size which will ensure a seamless general performance. Just like the Vivo S1, the new device also features the pop-up selfie and maintains the same design structure.

There are other major upgrades that the Vivo S1 Pro arrives with such as the Snapdragon 675 SoC and more which will be discussed in their appropriate sections.

When it comes to the design, the new smartphone arrives with a sleek and eye-catching design. One of the things that interest me the most about the smartphone is its notch-less display.

The notch-less display was made possible via the adoption of the Motorized pop-up selfie mechanism employed. The front of the smartphone is blessed with a Super AMOLED display which comes with a 2340 x 1080 pixels resolution.

The Vivo S1 Pro has a very huge screen of 6.39-inch with an aspect ratio of 19.5:9. It also boasts of a whopping 91.64% screen-to-body ratio. The unnotched full display makes the smartphone an excellent device for both movie streaming, gaming and other viewing experience.

Don’t worry when you don’t see a fingerprint sensor at the back, it is now under the screen (In-display fingerprint scanner). Meanwhile, on the back of the smartphone, you will only find the triple primary cameras positioned at the left side. primary cameras are accompanied by a powerful LED flash for detailed photos even in low light conditions.
The company’s logo ‘Vivo’ is imprinted at the downside of the back panel. The right side of the smartphone houses the volume rockers and power button. There are only two color options, Blue and Red that Vivo S1 Pro come in with.

On the back of the Vivo S1 Pro, there are triple camera sensors includes a 48MP Quad-Bayer with an  f/1.8, (wide) aperture. The second is an 8MP with an f/2.2 wide-angle aperture and finally, the 5MP depth sensing with an F/2.4 aperture.

The triple cameras have one powerful LED flash that ensures they take decent photos with enough details even in low light conditions.

When you look at the front of the Vivo S1 Pro, you will not see any visible camera sensor because it is hidden inside the smartphone. It is actually a Motorized pop-up sensor with a 32-MegaPixel with an f/2.0 aperture.
The total lifting time is 0.68s and it is also reliable in safety and ruggedness. The cameras video recording format is in MP4 and it also comes with features such as the AR shoot, Panorama, video, beauty, and photo.

One of the major upgrades that the Vivo S1 Pro arrives with is in the processing speed. Under the hood, the smartphone ships in with Qualcomm Snapdragon 675 SoC processor which ensure the smooth performance of the smartphone.

The smartphone arrives in two versions, there is the 6GB RAM accompanied by the 256GB worth of storage. The second is the 8GB RAM with a 128GB worth of storage both selling at the same price. Both storages can be further expanded up to 512GB using a microSD card.
The Vivo S1 Pro uses the company’s Funtouch 9 UI which is based on the latest Operating System, Android 9.0 (Pie). The smartphone’s performance is awesome and the In-screen fingerprint sensor is responsive and captures fast.
For connectivity, you have the Bluetooth, 4G connectivity for fast browsing, USB 2.0, and OTG support on standby.

The S1 Pro houses a moderate a Non-removable Li-Po 3700 mAh battery that you can power using the micro USB port.

We earlier mentioned that the Vivo S1 pro comes in two different models though they have the price tag. The first model is the 256GB storage with 6GB RAM, while the second is the 128GB storage with an 8GB RAM.

For all those who would like to obtain one of this smartphone, you will have to wait till 9th of May 2019 when it is expected to be on sale.

The Redmi K20 Pro is one of the most amazing smartphones currently on my 2019 recommendation list. The smartphone comes with awesome specs and intriguing features which qualifies it as a more refined device than the Pocophone F1.

The Redmi K20 Pro arrives with an awesome chipset, nice display, sharp cameras, huge battery, and eye-catching design. Despite featuring quite a number of amazing features and specifications, the smartphone still arrives with an extremely pocket-friendly price tag.