Here comes another one from Vivo and it is called the Vivo V15, which was unveiled on Friday the 22nd March 2019. The smartphone is set to join its siblings like the recently V15 Pro, Vivo X27 and other high-end smartphones lineup of the same maker. 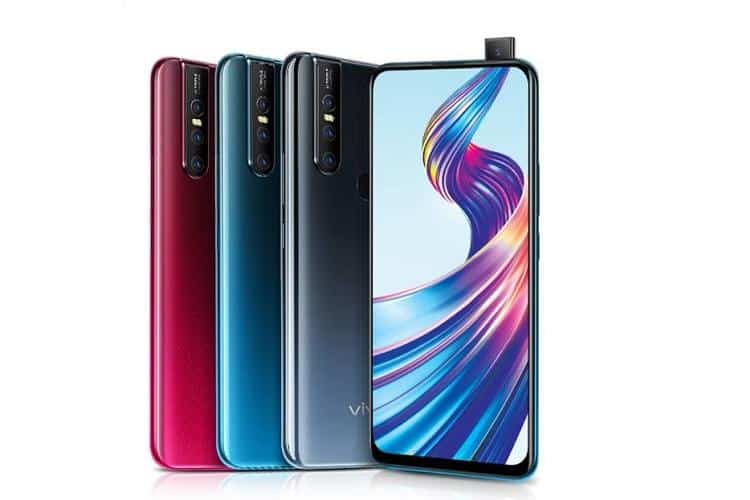 The Vivo V15 ships in with lots of interesting features which include a very large screen which most movie lover and gamers will love. It also comes in with other high-end specifications like the 6GB RAM and Runs on the Android 9 Pie.

The Vivo V15 features a simple but a premium kind of design and you will certainly look twice at the smartphone when you come in contact with it. Apart from the front side of this device which is made of glass, the rest of the body is made of plastic.

The Vivo V15 is far different from the Vivo V15 Pro in so many ways, though it comes with a gradient back panel. The front side of the Vivo V15 is blessed with a 6.53-inch Full-HD, with a resolution of 1080×2340 pixels. It also has a 19.5:9 aspect ratio and uses the Corning Gorilla Glass 5 for protection.

The Vivo V15 offers a full notch-less display, which is made possible as a result of the innovative pop-up selfie camera setup which consists of a 32-megapixel sensor with an f/2.0 lens.

The back side of the smartphone is decorated with a triple camera lens and a powerful LED flash that will ensure a brighter image even in low light conditions. The primary camera setup and the LED flash are all arraigned vertically and positioned by the left side of the device.

The smartphone also comes in three different colors and they are the Glamour Red, Frozen Black, and Royal Blue colors.

The camera of the Vivo V15 is one of the features that really caught my fancy and I believe it should be the same for most people. The total number of cameras on the Vivo V15 is 4 in number, one for a selfie while the remaining three are the primary camera.

On the front of the Vivo V15, you will not notice it has a selfie camera but it does. The selfie camera technically placed so you really don’t have to see when you are not taking a selfie. It is actually a pop-up selfie camera setup with a 32-megapixel camera sensor. And it is accompanied by an f/2.0 aperture.

Under the hood, the Vivo V15 runs on the Funtouch OS 9 based on Android 9 Pie. Then, there is also the octa-core MediaTek Helio P70 SoC which is powering the device. For a lag-free experience and performance, you have the 6GB RAM.

The Vivo V15 maintains one model of storage option and what they offer is a 64GB of inbuilt storage which can be further expanded up to 256GB using the microSD card, and that’s if you feel the internal storage is not enough for you.

The Vivo V15 is powered by a powerful and massive 4,000mAh Non-Removable battery capacity. The best thing about this smartphone’s batter is that it supports the dual-engine fast charging technology,  and this is sure what most people want in a smartphone.

According to Vivo, the smartphone will be open for pre-order on Monday the 25th March 2019. So, if you are interested in keeping one of the smartphones in your possession, then you can do that at the appropriate date stated above.

The starting price is currently given in India at Rs. 23,990 ($348), then you will be able to own one. It is important that we make it known to you that after placing your orders on Monday the shipping will begin on April 1.

For the rest of my friends out there in search of a smartphone that can be used to carry out all their basic tasks which involve the use of a mobile smartphone, then you can consider opting for the Vivo V15. The smartphone has lots of reason why you should consider it; first of all the smartphone ships in with a 6GB RAM, Large screen, nice cameras, longer lasting battery, and many other features.