Finally,  here comes the much anticipated Vivo smartphone, the Vivo X27 which was announced in China. The smartphone seems to arrive with some interesting features and specifications that you may find interesting. 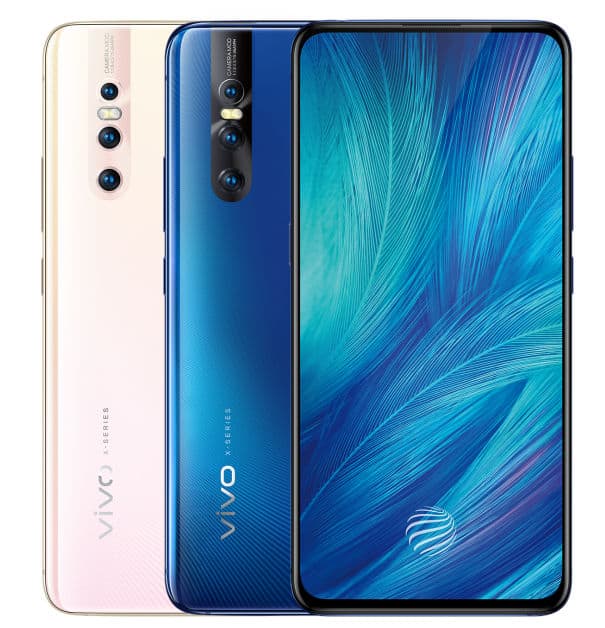 The smartphone which was announced March 2019, comes with awesome features like its pop-up selfie camera which is 16-megapixel, it also runs on the Android Pie-based Funtouch OS 9.

The Vivo X27 didn’t come alone, it was announced alongside Vivo X27 pro and the two smartphones seems to share a little similarity in common. But, the newly announced Vivo X27 has many similarities to share with the V15 Pro which was also launched in India a few days ago.

When it comes to the design of the Vivo X27, Vivo was able to deliver a breathtaking kind of innovative design.

On the front of the Vivo X27 is seated a powerful and large 6.39-inch Full HD+ Super AMOLED display which boast of a 91.64% screen-to-body ratio. The bezels around the screen have been greatly trimmed, as well as the small chin that is at the bottom of the smartphone, which gives it an overall premium look.

You will not be able to find a notch on the smartphone because it was completely removed. Are you wondering if there are no selfie cameras? Of cause there is. But, it was strategically housed in the pop-up selfie shooter, which allows comes up whenever you want to take a selfie.

On the back of the smartphone, you will see arranged camera setup which holds a triple camera with a powerful LED flash, all vertically positioned by the left side. Still, on the back, you will also find the responsive fingerprint sensor, which can be used to lock and secure the phone.

On the left-hand side of the smartphone, you will see the volume rocker, which is seated above the power button. The smartphone also comes in with the lovely 3.5mm jack.

Under the hood, the smartphone does not offer much in terms of color choices. It arrives in just two color options which are the black color option and the Gold color option.

Now the camera is also one of the main selling point of this smartphone, especially the selfie camera which was strategically positioned, making the notch-less display a reality.

The selfie camera is just a single 16 MegaPixel motorized pop-up sensor. The camera comes along with the HDR feature and records videos of [email protected]

Just like the cameras of the Vivo X27, the performance is also applaudable. Under the hood, the smartphone runs on the latest Android Operating System, Android 9.0 Pie with Funtouch OS 9 on top.

There are two different chipsets that power the Vivo X27. Inside the device, you will find the Hexa-core Qualcomm Snapdragon 710 accompanied by the 10nm Mobile Platform (Dual 2.2GHz Kryo 360 + Hexa 1.7GHz Kryo 360 CPUs). Meanwhile, there is the Adreno 616 GPU which handles everything concerning graphics.

There is still the 128GB variant which is powered by an 11nm Mobile Platform Qualcomm Snapdragon 675 SoC with Adreno 612 GPU handling the graphics. And the two chipsets are all paired with an 8GB RAM and 256GB for internal storage.

For those who are not comfortable with the internal storage option and want more. The Vivo X27 allows you to further expand the storage option by up to 256 GB using the microSD.

Powering the Vivo X27 is a massive and powerful 4000mAh battery capacity and also comes along with the Fast battery charging 18W technology. Unfortunately, the smartphone does not come with wireless technology. But the fast charging technology will ensure an extra battery juice which can last you hours whenever the device is low.

The Vivo X27 is one of the smartphones that I admire so much, and it has been able to deliver on all sides, unlike most smartphones that will deliver on one side and fail on the other side. The Vivo X27 was able to offer both great performance, nice design, awesome cameras, longer lasting battery, large screen and other interesting and amazing features that the smartphone comes in with.