Here is another newly introduced smartphone from Xiaomi and it is called Xiaomi Mi3 Pro. This smartphone is an upgrade to the previous Xiaomi Redmi 3, which is still being considered as one of the best deals anyone could get on a 5-inch smartphone. 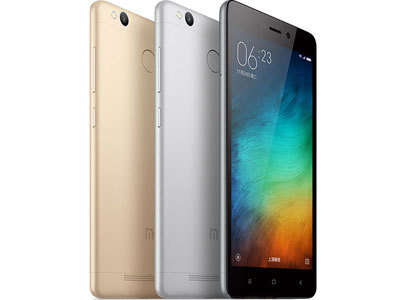 The Xiaomi Mi3 Pro features amazing upgrade from the previous Xiaomi Mi3 such as more RAM, more storage and a fingerprint sensor that is on the back of this smartphone. Stay tuned to see the complete factors that make this newly announced(On 29 March 2016) unique device.

The body of this smartphone is made of aluminum except for the top and bottom where the antennas are placed are made of plastic. The Redmi 3 Pro has a body dimension of 139.3mm thickness, 69.6mm width, 8.5mm hight and finally 144g for the weight.

The Xiaomi Redmi 3 Pro comes in with three color variety which is the gold, silver and dark gray.

At the top of this device you will see the 3.5mm jack, while below the screen, we have the capacitive control set that comprises of Task switcher, Home, and Back keys.

On the left-hand side of this smartphone, is where you find the tray where you put your two SIM cards or a microSD card and one SIM card. On the right side house the power button and the volume rocker.

There is a primary camera, a single LED flash, a loudspeaker at the back of the Xiaomi Redmi 3 Pro.

The smartphone is equipped with a 5 inches screen that has a resolution of 720 x 1280 pixels and a pixel density of 294ppi. It also has a screen-to-body ratio of 71.14 %, meanwhile, the screen is an IPS LCD screen.

Xiaomi Redmi 3 Pro arrives with a 13MP primary camera just like the Redmi 3. It is accompanied by a standard LED flash. The camera comes with an HDR mode and a hybrid autofocus system utilizing phase-detection providing you a faster and more accurate focus.

The Xiaomi Redmi 3 Pro comes in with a 5MP selfie camera. The images produced with the selfie camera comes out soft with average detail.

The Xiaomi Redmi 3 Pro can record videos up to [email protected] The bitrate of the video recordings is uninspiring around 15 Mbps while audio is captured at 96 Kbps with two channels (stereo).

Xiaomi Redmi 3 Pro is powered by the Snapdragon 616 chipset. The SoC offers eight Cortex-A53 cores, four of them clocking at 1.5GHz and another four clocking at 1.2GHz. This device also uses Adreno 405 for graphics and also arrives with a 3GB RAM.

The Xiaomi Redmi 3 Pro runs on the MIUI 7.3, which utilizes an Android 5.1.1 Lollipop core. The MIUI is one of the most comprehensive customizations of Android.

This smartphone has an internal storage of 32GB. The storage can still be expanded via MicroSD, up to128GB.

The Xiaomi Redmi 3 Pro comes in with a 4,100mAh battery, which is the same as the one in the Redmi 3.

The Xiaomi Redmi 3 Pro scored a 104h rating during our test, which means which is going to 4 last days approximately, for an hour of calling each day, web browsing and video playback a day. This device supports the fast charging technology.

The Xiaomi Mi3 Pro is sold at 150 USD (54,600 Naira). You can purchase this smartphone from most online stores or any Xiaomi Mi3 Pro distributor within your area.

The Xiaomi Mi3 Pro arrives with lots of amazing upgrades. This smartphone features an unbelievable 3GB RAM, a fingerprint sensor and many other wonderful features. Despite arriving with all these nice specs, this device is still affordable.