After the official release of the above phones’ specifications, we thought it good to compare the two smartphones. Both Phones sporting 1080p displays, Snapdragon 801 processors, and high-resolution cameras, we are going to look into both the similarities and differences between these two classical phones. 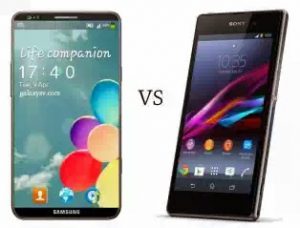 Galaxy S5 Comes with a higher internal memory of 16/32 GB storage upgradeable upto 128GB via Micro SD against that of Xperia Z2 with 32GB storage upgradeble to 64GB. Xperia Z2 comes up in the RAM department to beat its Samsung counterpart with a 3GB RAM against 2GB of Galaxy S5.

Both phones come with high pixel camera. But the Sony Xperia Z2 has an edge over its Samsung counterpart though both phones has a LED Flash on the back. The Xperia Z2 has a 20.7 Mega Pixel Primary Camera and 2.2MP Secondary camera against Galaxy S5’s which has 16MP and 2.0MP for Primary and Secondary Cameras respectively.

GPRS: Yes on Both devices

EDGE: Yes on Both devices

NFC: Yes on both devices

Infrared port: Yes on S5 and No on Xperia Z2

Browser: HTML5 on both devices

Radio: FM radio with RDS on Xperia Z2 and No on Galaxy S5

GPS: Yes, with A-GPS support and GLONASS on Both devices

Java: Yes, via Java MIDP emulator on both devices