One of the largest smartphone company in China, Xiaomi is set to launch a new smartphone as soon as next week. The new smartphone which will be called Xiaomi Redmi 3 sports a metal panel. Xiaomi also stated that the smartphone will sport a 5-inch display. However, no other specifications were shared. The device will most likely launch on 12 January.

Following a picture of the Xiaomi Redmi 3 that was shared online many rumoured specifications have emerged. According to rumoured specification the device features a 5-inch HD resolution TFT display with a 720 x 1280 pixel resolution. It will be powered by a 1.5 GHz octa-core processor paired with 2GB RAM. It will mostly feature an internal storage of 16GB, which can be further expanded up to 128GB via a microSD card slot. 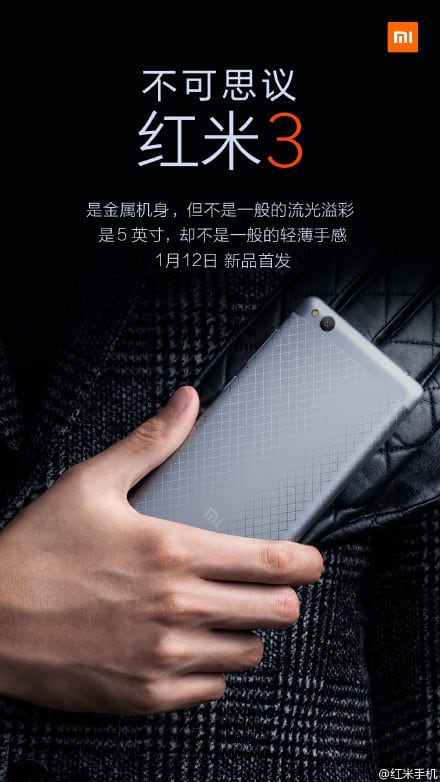 The smartphone is expected to pack in a 13MP rear camera and 5MP front facing camera and boot to Android 5.1.1 Lollipop with the MIUI V7 skinning on top.

We keep our fingers crossed for the official launching of the Redmi 3 and be sure you will get to know when it’s out here on OscarMini.