Investing in the right night vision monoculars will help you spot the things you would’ve normally missed, so they are extremely important. It doesn’t matter if you are watching wildlife, camping or simply navigating in the great outdoors during the dark, monoculars are the ideal device for human beings right now. See the best options in our list of 5 best night vision monocular:

If you need a proper night vision monocular, this is it. It comes with both a 5x magnification and a large objective lens to help you view any action in a superb manner.

The real attraction here is its high-powered infrared illumination though, as it leverages an electro-optical system that will come in handy when you have to view something in low-light and total darkness. Its IR button can also be enabled and disabled for daytime use as well. 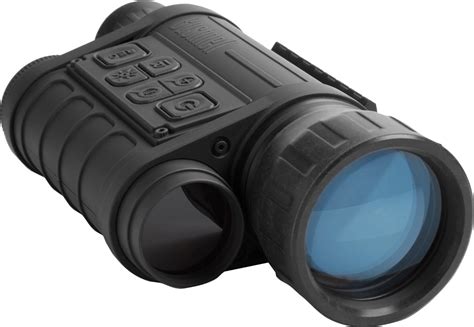 Bushnell is known for its several monoculars and other night vision wares that will dazzle you, but this particular option stands out.

Users are guaranteed 4.5x magnification, 3x digital zoom and a 40mm objective lens to view whatever you want. It also comes with video and image capturing capabilities, thanks to the Micro SD card slot, plus its design can be mounted for hands-free use.

If you need infrared illumination but you do not wish to overspend, this is the option to go for. It possesses 4x digital zoom, 3x optical magnification and scope that lets you view up to 650 feet away.

If you wish to capture photos or clips, you can leverage the Micro SD card slot as well, even if the device will need 5 AA batteries to work. For its price, however, you can expect lots of amazing features. Because Vivreal’s monocular is a budget option while offering amazing features, this is an ideal choice for occasional use.

It provides 12x magnification and a 42mm object lens diameter, with the range extending to around 360 feet. It is also designed with an IPX7 waterproof rating coupled with a fog-proof coating on the lens. It is not heavy as well, making it brilliant for outdoor use.

This is the monocular for anyone looking to get value for money. It comes with 8x digital magnification and 5x optical magnification, with the 850NM infrared illuminator and HD 1/3 CMOS sensor making it simple to view, snap and shoot video in the dark up to 200m (1000m in daylight).

It also possesses a rechargeable battery, meaning you will not need to move about with any AA battery.