There is a reason why the Apple Watch keeps dominating the smartwatch market, it is obviously that amazing. Even if it only functions with iPhones, the Apple Watch is surely a step ahead of its rivals. Since it is very popular, the smartwatch is also backed up with a wide accessory ecosystem and we break them down with our list of 5 Best Accessories For The Apple Watch:

The brains behind the Apple Watch definitely did a good job with its amazing charging dock. Even if it has a wide base, its Charging Dock does not compel users to feed the Watch charging cable via it.

Must Read: How Do I Enable LTE Cellular Service On My Apple Watch?

Rather, owners can simply connect the Lightning cable added with their iPhone. On top of that, the Watch can be set flat or on its side to use as a bedside clock.

This is a dock that allows you to wirelessly charge the iPhone and the Apple Watch simultaneously. It also features an additional USB-A port that will aid you to charge other devices such as an iPad or AirPods.

Must Read: How To Set Up Emergency SOS On Your Apple Watch

It works with all iPhones that support wireless charging and alliteration of the Apple Watch, including the new series 5.

Still on the topic of best accessories for the Apple Watch, This is one of the best Apple Watch accessories out there and the old school folks will definitely adore it. This is because of its vintage design reminiscent of the original Apple Macintosh PC. Apple’s nightstand mode can be used and you are allowed to plop your Watch in the screen gap. 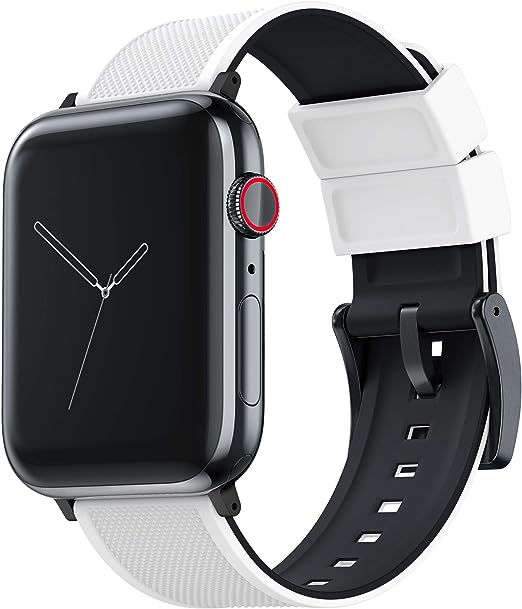 Apple already makes amazing watch straps for the Watch, but users always want more. If you are an owner like that, the Barton Watch Band Adapters can definitely give you what you want.

It fits the small and big Watch plus it works with all watch bands designed for a 22mm watch lug. Barton provides its personal election of 22mm watch bands, including leather, silicone, NATO, and so on.

Simply because the Apple Watch Sport Loop is one of Apple’s least expensive watch bands does not mean that it is a wrong option. In fact, it is the best option for Watch users who want a casual look. Its double-layer nylon weave is super soft on the skin. It is very breathable as well and it allows you to wear it while exercising at the gym or jogging.

Apple Watch is a line of smartwatches produced by Apple Inc. It incorporates fitness tracking and health-oriented capabilities with integration with iOS and other Apple products and services.

Apple Watch operates primarily in conjunction with the user’s iPhone for functions such as configuring the watch, calling and texting, and syncing data with iPhone apps, but can independently connect to a Wi-Fi network for some tasks.

LTE-equipped models of Series 3 and later can independently connect to a mobile network, substantially reducing the need for an iPhone after the initial setup.

Compatibility with the iPhone depends on the versions of the system software that each is running; as of February 2020, new Apple Watches come with watchOS 6 preinstalled and require an iPhone running iOS 13.

The Apple Watch was released in April 2015 and quickly became the best-selling wearable device: 4.2 million were sold in the second quarter of fiscal 2015. In subsequent years, a new Series has been introduced each September.

There you have it – a comprehensive list of 5 of the best accessories for the Apple watch. If you have any personal favorite or other recommendations, feel free to drop them in the comment section below.

5 Best Weird Gifts For Friends and Family In 2021