This was the smartphone we all waited for from HTC after the major success recorded by the Taiwanese company upon making the predecessor (M8) available last year. 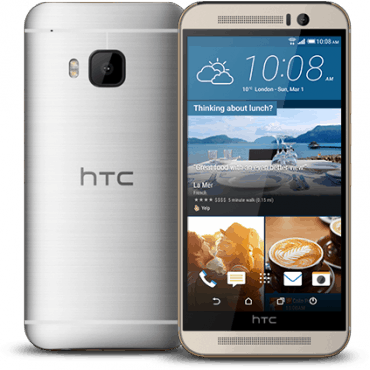 This time, HTC decided to bring to us a sleek smart android device as you would have presumed, though some things still stayed the same, the smartphone wasn’t a bad release as compared to other devices out there right now. Let’s get a little into what this device stands for.

“Sleekier” than ever. With a metallic design, it is very much like the M8 which was undoubtedly a well designed piece. It varies with a two-toned touched and also it was designed to make it easier to hold (i.e less slippery than it’s predecessor).

HTC finally decided to give her fans what they had always longed for in terms of camera, the conventional large pixel count (as if it had a major role to play in the picture quality) and this device now comes with a 20.7MP camera. While that makes the rear a wonderful camera, the front camera now has the M8’s camera for wonderful selfies.

The display on the other hand is a full HD 1080p pin sharp 5.0 inch display. In my opinion, it’s an overkill combo, but I wonder if the battery was actually put into considerations for such a display.

Generally, the HTC One has an excellent performance. Topped up with extra four cores that can be pushed to insane working limits, the octa-core processor (2 sets of Quad cores clocked at 1.5GHz and 2.0GHz respectively) though they work one at a time, makes this smartphone a performance beast.

Backed up with a 3GB of RAM, you expect a smooth ride all the way in performance on heavy resource sapping games or applications.

This is one of the major challenges this smartphone seems to posses. There wasn’t a major improvement on the battery as compared to the processor and 1080p display this device has to power. This doesn’t mean that you won’t be able to listen to your favorite music for a couple of hours, it’s just that it wasn’t what I had expected from the device, at least in my opinion.

Check out a tabulated review of it’s specifications below.

HTC HTC One HTC One M9

HTC 10 – The Most Powerful Smartphone So Far