South Korean smartphone makers, Samsung has introduced yet another interesting budget smartphone called the Samsung Galaxy A20s. The basic smartphone was announced in September 2019 alongside other of its siblings and was later released to the market the following month.

One of the main selling points of the Galaxy A20s is the triple camera shooters on the back of this device. 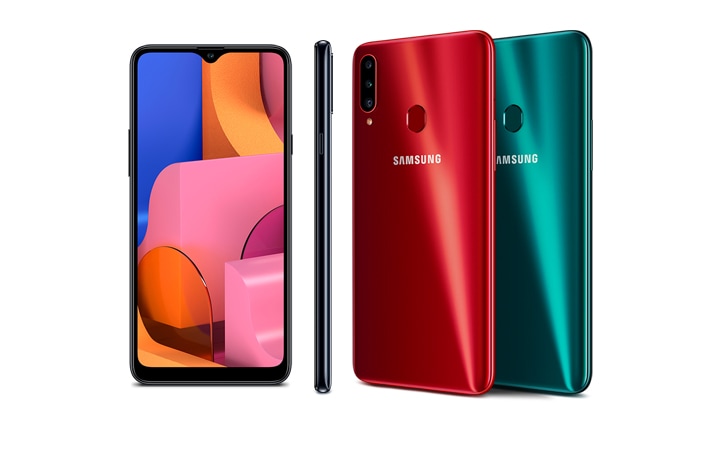 Apart from the primary cameras, the smartphone still arrives with other interesting features such as a 4000mAh battery, as well as a huge 6.5-inch display, great design, waterdrop notch and many other interesting specifications and features that will be discussed in-depth in this review.

At first sight, you will think that the Samsung Galaxy A20s is made of Glass, but no, it’s a plastic premium body build, though it gives you a glass feel. The front side of this new smartphone is dominated by a 6.5 inches massive IPS LCD capacitive display with a resolution of 720 x 1560 pixels.

The frames on the Galaxy A20 is well-trimmed, except for the slightly obvious chin. There is a single camera sensor residing inside the waterdrop notch that is seated above the screen. At the top of the screen, there seats the earpiece, while other sensors are strategically positioned on the notch.

Must Read: Samsung Galaxy A20 Review – Specs, Features, and Price

On the back of the Galaxy A20s lies the triple camera sensors that are vertically placed and positioned to the left side. Under the primary camera setup is where you will find the LED flash which helps the primary cameras produce impressive and well-detailed images even in low light conditions.

Unlike the Galaxy A30 and A50, the volume rockers are on the left side of this smartphone, while the right side houses the power button. Other elements of the Galaxy A20s still remain in their ancestral positions.

Samsung made the Galaxy A20 available in four beautiful color options which consist of the Black, Blue, Red, and the Green color option.

The cameras on the Samsung Galaxy A20s happens to be one of its selling points just as we mentioned earlier. The smartphone has a total number of four (4) cameras which consist of the three primary cameras on the back of the device and the single selfie camera on the front side of the smartphone.

As a matter of fact, the triple primary cameras on the back of the A20s are its biggest highlight. They are located at the back of the device and comprise a 12MegaPixel which happens to be the main sensor with an f/1.8 aperture and PDAF.

Some of the features of the triple primary camera sensors include LED flash for brighter images, panorama, HDR, and more.

On the front side of the Galaxy A20s, on top of the screen lies the U notch which holds the single 8-MegaPixel and an f/2.0 aperture. The selfie camera doesn’t feature any front LED flash, but they were able to produce beautiful and well-detailed images.

Under the hood, there is a mid-range Qualcomm SDM450 Snapdragon 450 holding the Galaxy A20s at the center. The chipset is based on a 12 nm tech with an octa-core processor that runs at 1.8 GHz.

For graphics production and better gaming experience, you have the Adreno 506 GPU which handles the graphics department.

The Samsung Galaxy A20s runs on the modern Operating System which is the Android 9.0 Pie out of the box. The overall performance of this smartphone is nice compared to its rivals.

There are two (2) versions of the Galaxy A20s; the one with a 3GB RAM and 32GB internal storage option, and the second which is a 4GB RAM with 64GB internal storage. One of the good things about the storage is that both models can be further expanded up to 1 TB via micro SD card.

Just like the other siblings, it was announced alongside, the Galaxy A20s features a huge Non-removable Li-Po 4000 mAh battery.

The battery of the Galaxy A20s can confidently carry you through the day even with heavy usage. It has been also built to support 15W Fast battery charging technology and can give you 30% battery juice from 0% in about 30 minutes.

The price tag on the Samsung Galaxy A20s should be around Rs. 11,999 in India, while in Nigeria, you can purchase the smartphone for about 60,000 Naira.

As of the time of writing, the Galaxy A20s is already available if you want to purchase the smartphone and they are presented in either Green color, Red, Black, and Blue.

You can either decide to buy this smartphone from online stores or any authorized Samsung smartphone dealer or distributor around your region. Please note that the price stated here and the price at which you might see the smartphone may slightly differ due to location and deal.

The Samsung Galaxy A20s happens to be a dedicated budget contender. But, one good thing is that it doesn’t just have a low price tag, it also provides users with great performance and user experience in general.

It has a huge battery life, large screen, runs on the Android (Pie), an okay performance, and a low price tag. But, nevertheless, there are other smartphones that are currently going head to head with the new smartphone in the likes of the Moto G7 Plus, and Xiaomi Redmi Note 7.

Hi, My name is Samuel, though friends know me better as a technophile or cyberjunkie. I'm a mass communication student of Rivers State Polytechnic who enjoys writing and discussing about the breakthroughs and innovations on technology.