Samsung Galaxy A70 Review: The South Korea tech giant, Samsung has always been known for producing awesome smartphones that usually finds its way to always suit both the budget-tier and those who love pricey flagships.

This time around, the smartphone makers have dished out another powerful one called the Samsung Galaxy A70 which was announced on March 2019 and will be released on April 2019. 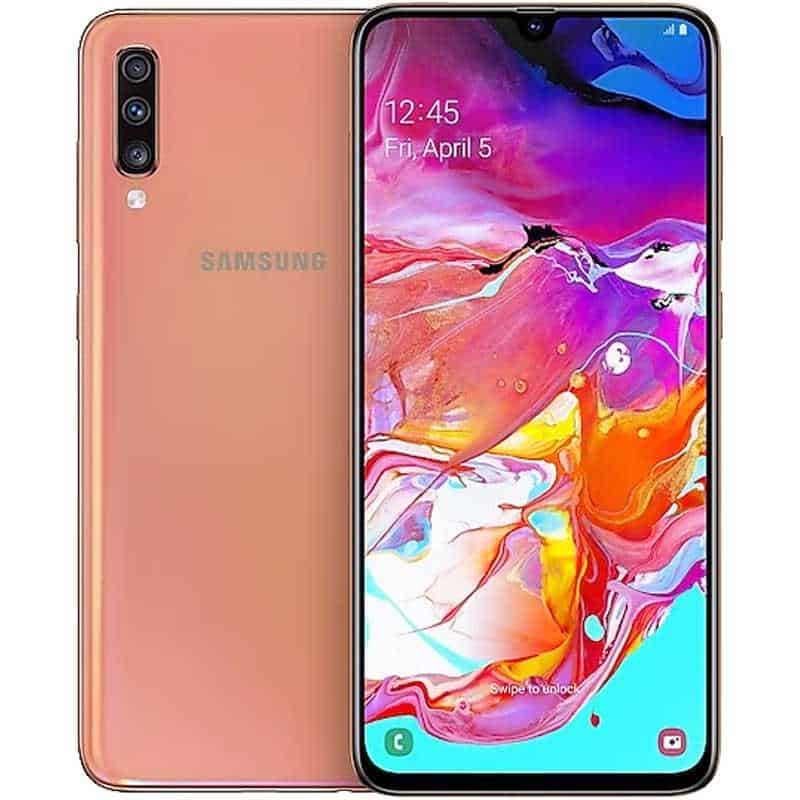 Samsung intends to fill the gap between the super pricier smartphones and low budget smartphone with the production of the Galaxy A70. It comes in with a lot of interesting high-end features that are entertaining and exciting.

Samsung Galaxy A70 review: Everything you need to know

The Samsung galaxy a70 maintains a low price tag when you compare it to phones like the Galaxy S-branded bellwethers, though it offers you a host of enticing and exciting features without digging deep into your wallet.

Without having to take much of your time, let’s jump into the full review in proper. Just grab a cup of coffee as you go through the long list of enticing features of Samsung’s latest mid-range handset.

The Galaxy A70 features a nice and simple design which gives a simple look with Samsung’s signature boldly written on it.

It’s a huge smartphone with a huge screen of 6.7″ Super AMOLED screen having a resolution of 1080 x 2400 pixels seated in the front of the device. The screen uses the Corning Gorilla Glass 3 for protection. On top of the screen is a dewdrop notch which houses the single camera.

Must Read: Samsung Galaxy A50 Review – Specs, Features, and Price

The earpiece has been strategically placed above the camera, which you may not see if you are not careful. We search but couldn’t find any notification light.

The back of Samsungs latest device is made of a plastic material which the company identified as ‘3D Glasstic’. Don’t be mislead by its name, it’s actually a plastic back though you can easily mistake it for glass.

The front of the device doesn’t have those curve you will find on recent Galaxy S phones. The front is almost covered with screen except for the thin bezels like the ones on the iPhone XS.

The fingerprint sensor is an under-screen fingerprint which you don’t need to wake up the phone before you can use it. All you need to do is place your finger on the spot and it successfully recognizes you, you’ll be taken to the home screen.

Must Read: Samsung Galaxy A80 Review – Specs, Features, and Price

The back houses the triple camera sensors vertically arranged by the left-hand side with a LED flash below it.

Other components of the device are positioned by the sides – you will find the volume and power buttons on the right side, a tri-card slot on the left, while the speaker grille and the audio jack are at the bottom.

Samsung Galaxy A70 is very much potent when it comes to photographic capabilities. On the front of the smartphone inside the notch lies the single 32 MegaPixel selfie camera with an f/2.0 aperture.

On the back of the smartphone is the vertically positioned triple camera sensors which comprise of a 32-megapixel (f/1.7) which is the main sensor. It is accompanied by an 8-megapixel (f/2.2) ultra-wide 123-degree lens and the 5-megapixel (f/2.2) depth-sensing very relevant for an effective blurred background portrait.

Must Read: Samsung Galaxy A40 Review – Specs, Features, and Price

All the cameras on the Samsung Galaxy is a prodigy and it takes super clear images outdoor with enough detail. The only place that you might experience some disappointment in the camera is shots during low-light conditions. Nevertheless, it still does a better job than most other smartphones of the same range.

Under the hood, you will find the octa-core Qualcomm Snapdragon 675 chipset powering the Galaxy A70. It has a speed of 2GHz. The chipset delivers really fine but we had expected something higher since the Galaxy A50 uses the Samsung-made Exynos 9610 chipset which is a bit higher than that of the A70.

The Samsung Galaxy A70, when put to test, proved to be very potent in terms of quick response and general speed. Nevertheless, the cheaper Galaxy A50 is faster than the Galaxy A70, though, in the competition, the A70 stacks up quite well.
There are two options for security, you can either go with the Fingerprint or the face recognition which response within a second. For graphics and gaming, you have the Adreno 612 which handles that aspect very well.

Powering the Galaxy A70 is a huge 4,500mAh battery which is an improvement over the A50. The battery also supports the 25W fast charging via the USB2.0, Type-C 1.0 reversible connector.

You can have an extra 42% of battery juice in 30 mins. The overall endurance rate of the battery is 103h, while for video looping you have 17+ hours. You can also surf the webs for about 13+ hours.

With this battery, a day and a half use are guaranteed and you might likely get up to two days use from a single charge. The result is very impressive which makes it the first smartphone to reach this podium since last year’s Moto E5 Plus in our battery life hierarchy.

Like we mentioned earlier, Samsung intends to use the Galaxy A70 to bridge the gap between the pricier smartphones and low budget smartphone without altering quality.

The Galaxy A70 has a starting price of about 330 EUR which is roughly estimated to 362 USD and N131, 300 Naira. The price can slightly sift depending on the deal and region.

You can obtain one of these smartphones if you like them from any online stores or authorized Samsung distributors.

Despite coming in with a host of great things and specification, the Galaxy A50 which is way cheaper than the Galaxy A70 offers virtually the same user experience. Though A70 has a slightly bigger screen than the A50, when the big screen is not totally your problem, the Galaxy A50 is altogether a much worthy smartphone than the A70.

If you are not buoyant enough to purchase the A70 smartphone, then, you can try the Realme X smartphone which is much cheaper and with almost the same performance.