Following the tremendous improvements witnessed in the world of technology, we have begun to see a lot of futuristic techs come into reality. One of such tech, formally regarded as futuristic, is foldable phones. Samsung has developed a foldable phone, that can practically fit into our lives. This article contains an in-depth review of the Samsung Galaxy Fold, ascertaining its pros and cons. Here you would also find info on specs and price 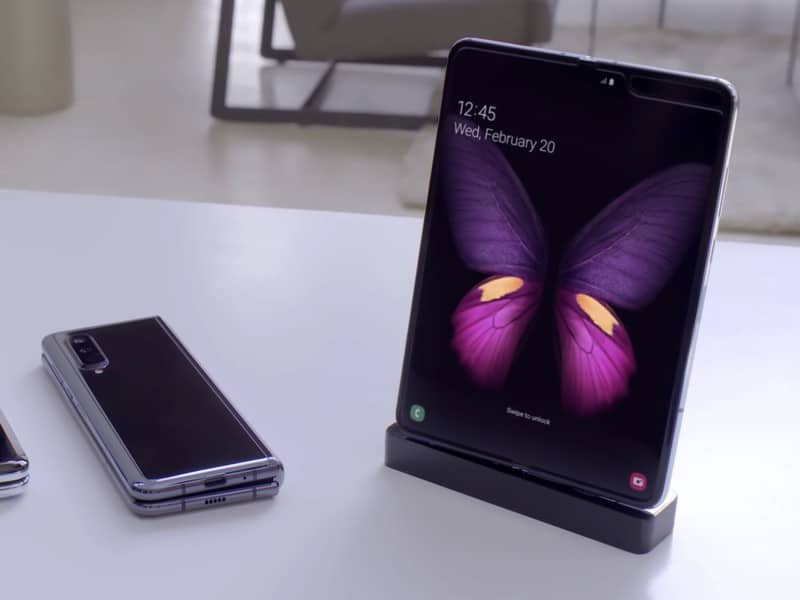 The smartphone was announced on 20th February 2019 and we have been able to take a much closer look at this device than we had before now. The Samsung Galaxy Fold is not the first foldable smartphone, but since this is a device coming from one of the most reputable smartphone makers, it is worth looking at.

Without actually wasting much of your precious time, sit tight as we take you round this fantastic, breathtaking smartphone.

Seated on the front side of the Samsung Galaxy Fold is a 7.3-inch QXGA+ (QHD+) Dynamic AMOLED (4.2:3) Infinity Flex display when opened, but when it is closed you can it offers you a 4.6-inch HD+ Super AMOLED (21:9) display which changes the device from a tablet to a smartphone when it is closed.

Samsung made the Galaxy Fold available in four color option though you can customize the color of the hinge. The four colors that this device comes in with comprises of Space Silver, Cosmos Black, Martian Green, and finally the Astro Blue.

When the Galaxy Fold is folded, it has a chunky look, which makes it a little bit tricky to place in your pocket. We also have the stereo speakers, tuned by AKG, and the sounds that it offers are fantastic.

The Samsung Galaxy Fold comes in with a huge battery, a fingerprint sensor which is by the side. Meanwhile, the battery supports the wireless charging technology and can be used to charge other smartphones (Wireless PowerShare) wirelessly. You will also find a pair of Samsung’s new wireless buds in the box.

When it boils down to the camera of the Samsung Galaxy Fold, this device comes with a total number of six cameras. With three cameras doubling as the primary cameras, one for the selfie and the other two seated above the 7.3-inch display inside the fold.

The Samsung Galaxy Fold is powered by a powerful high-end 7nm processor and packs a 12GB RAM, which makes this smartphone currently one of the most powerful in the market.

This smartphone comes in with 512GB worth of internal storage and supports UFS 3.0 (Universal Flash Storage). The UFS 3.0 lets the smartphone to read data very fast. Meanwhile, for all those who are not comfortable with the 512GB storage, we are sorry because this device doesn’t support expandable storage. So, you will have to deal with internal storage.

The Samsung Galaxy Fold runs on the latest Google Android OS, the Android 9 Pie, meanwhile Samsung also created a unique interface which makes it more compatible with the foldable screens. When you fold the screen, you can still run up to three apps on the large display all at the same time.

This smartphone also comes in with what is called App Continuity and what it does is to allow you to continue using your running apps as you fold between the large and small displays. The Samsung Galaxy Fold comes in with Microsoft Office, and WhatsApp have been specially placed in this smartphone to work with the Galaxy Fold’s 7.3-inch display.

Powering this excellent device is a powerful 4,380mAh battery capacity in each half of the Samsung Galaxy Fold, both working together to deliver one power source.

Samsung was also able to package the Samsung Galaxy Fold luxuriously, and it also added a pair of its new wireless buds in the box.

The Samsung Galaxy Fold comes in with a price tag of about $1,980 / €2,000 / N717,000 in Naira, which makes it much more expensive than the rest of the flagship smartphones that are currently in the market.

The prices we listed above are just the official prices that are currently available; others depend on whether you convert USD to euros then you will be looking at the price tag of £1,500-£1,700 in the UK, while AU$2,800-AU$3,200 in Australia.