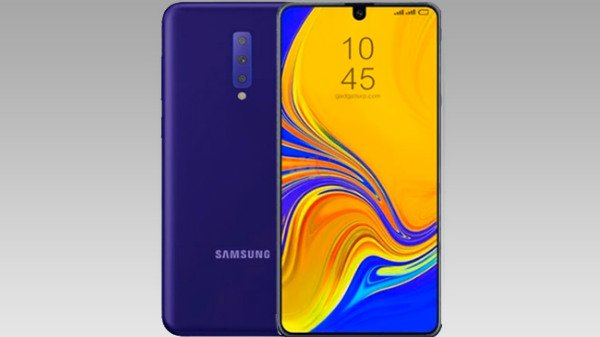 Both the Galaxy M10 and Galaxy M20 were both announced on January 2019 and will be released in February 2019. The M20 has been the smartphone we have been using for close to 14 days now and though the intentions of Samsung were made known on papers. The question is, does it offer the same in real life? Come with me let’s see all that this smartphone comes in with.

Samsung was able to offer a neat design on the newly announced Samsung Galaxy M20. The smartphone has a thin bezel and a water drop notch just like the Realme U1 and the Honor 10 Lite.

This smartphone also comes with a polycarbonate body and feels and seats well on the palm. The oval fingerprint sensor is placed just at the center of the back, which makes it easy for your finger to locate. The smartphone has a smooth and glossy finish and does not imitate glass.

The body of the M20 is not very thick though it weighs 180 grams and from experience, it is obvious this is not overall the best design from Samsung. It seems Samsung wasn’t going for a premium look.

Meanwhile, on the right-hand side of this device you will find the volume rocker, and on the left, you will see the SIM card tray. Take a look at the bottom of the M20, and you will find the USB Type-C port alongside the audio jack and speaker grill.

Samsung Galaxy M20 comes with a 6.3-inch FHD+ (2340 x 1080p) PLS TFT panel. PLS is the acronym for  Plane Line Switching, which is Samsung’s proprietary display design just like the IPS (In-Plane Switching). The M20 also features a single camera on the front of its device, while on the back is seated dual camera sensors.

For all the selfie lovers in the house, you have the 8MP for all your selfie images. The selfie image comes with the f/2.0 aperture. The camera will not be able to offer you great shots when your hands are not steady, but it is better than most smartphone cameras. The selfie camera lacks details and will also be unimpressive in low-light conditions.

The Galaxy M20 runs on the older version of Android, the Android 8.1 (Oreo) and is powered by the new Exynos 7904 octa-core chipset. The M20 comes in two models, the 64 GB with a 4 GB RAM or the 32 GB version with a 3 GB RAM. The performance of this device is impressive and responsive.

Though the performance and the chipset overall is impressive, when it comes to playing graphics-intensive games it is not the best. We were able to play the PUBG Mobile on medium settings; we noticed that the M20 was struggling a bit to run the game well.

Nevertheless, the Exynos 7904 octa-core chipset is still the second best after the Snapdragon 636 which is featured in smartphones like the Redmi Note 6 Pro.

The M20 uses the Samsung Experience (version 9.5 UX) which is smoother and a more modern version. Notwithstanding, the Samsung Experience remains one of the most customization interfaces which allows users to tweak the appearance anyhow you want. You can even select the icon packs, change the size of the grid, change the icon size, and other great stuff that you can achieve.

The battery of the Galaxy M20 is one of the most talked about specs of this device. The Galaxy M20 is powered by the jumbo size 5000mAh battery, and we all know this is rear from Samsung.

The Galaxy M20 supports fast battery charging using the USB Type-C and also comes with a 15W fast charger unboxing. During our test on the M20, the battery offered an extra 50% battery juice in 60 minutes.

The Samsung Galaxy M20 is overall a fantastic smartphone with excellent specs and design. The device is balanced because we think that’s the best words to describe the device.

Considering the price the M20 drives in with, it still manages to offer a robust battery life, good performance, also an excellent multimedia performance and a host of other great features that this device drives in. Don’t get it twisted, everything is not all rosy for this device, as it also comes in with few flaws like the older Android version it runs on and the average camera performance.

Nevertheless, overall the Samsung Galaxy M20 ticks all necessary basic boxes that qualifies it as a smartphone for both the youths and the older people. If what you want in a smartphone are longer battery life, excellent performance, and large display, then the M20 is a device for you.