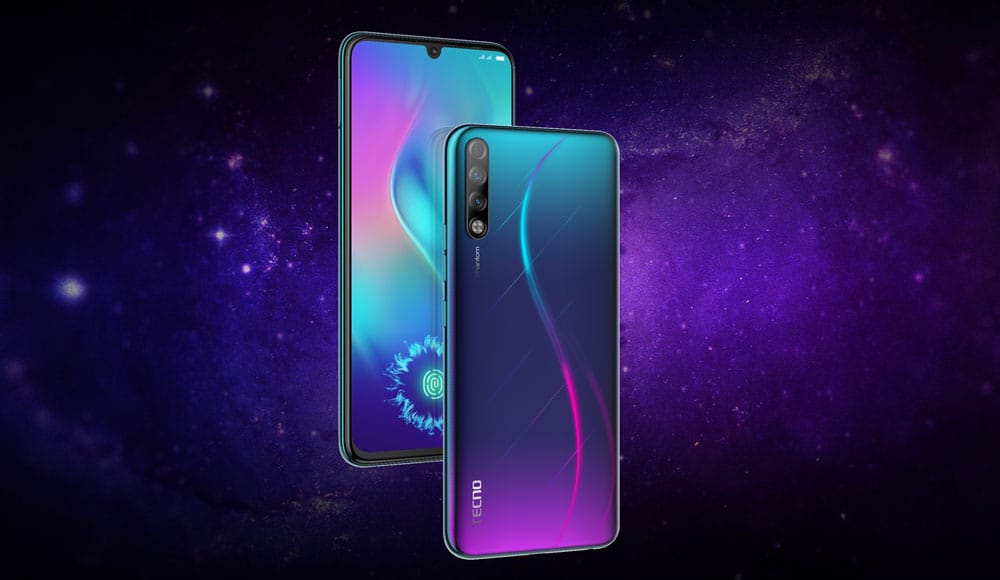 In 2018, everyone expected to see the Tecno Phantom 9 but for reasons best known to Tecno, the smartphone wasn’t realized which made many people conclude that it was the end of the road for the Phantom Series.

Fast forward to the ending of July 2019, when all hope has been lost, Tecno finally announces the long-forgotten Tecno Phantom 9 which finally arrived in August 2019. We will be sharing everything thing you need to know about the new Tecno Phantom 9 smart including those exciting features which makes it one of the most innovative smartphones of the company.

One of the features of the Tecno Phantom 9 is its well-positioned waterfall notch which houses the single impressive camera. The teardrop notch which holds the single selfie camera is seated on top of the gorgeous 6.4-inch display.

The Tecno Phantom 9 is the first Tecno smartphone to feature such a large display which makes it outstanding. The size of the display notwithstanding is not totally the center of attraction as what makes it unique is its choice of the resolution.

It’s not a secret that the larger the screen, the higher the resolution, and the higher the pixel resolution, the better. The Tecno Phantom 9 employed a Full-HD+ (1080 x 2340 pixels) which is a lot better than the HD+ (720 x 1520 pixels) screen which devices like Camon 11s, Camon i4, and others arrived with.

The new smartphone has lots of bright and attractive colors which comprise of the Aurora of Lapland Aurora, Blue, and the Champagne Gold.

Apart from the beautiful design, and the gorgeous 6.4-inch display, the cameras is still one of the exciting features. The Tecno Phantom 9 arrives with a total number of four cameras which all offer beautiful shots.

Some of my friends consider the camera as one of the most innovative parts of the new device. Like we earlier mentioned, the front notch contains the single selfie camera with its Led flash strategically positioned to enable the smartphone to maintain a clean and a unique look.

The single selfie camera is a 32 MegaPixel with an f/2.0 aperture. It has a powerful Led flash and can record videos of [email protected] and it also features an HDR. We had expected it to come with the OIS but we couldn’t find any.

On the back of the Phantom 9, you will find the Tripple cameras which comprise of a 16-megapixel for main camera with quad-LED and PDAF. The second is a 2-megapixel for depth sensor for both Bokeh and other AI geeks. The third is an 8-megapixel wide-angle lens. Below the triple camera is a dual-LED flash on that thin frame.

The Tripple cameras are using the artificial intelligence on the back of the Phantom 9 uses the smartphone’s Android 9.0 Pie and CPU which will all result in a great camera experience.

The newly launched Tecno Phantom 9 is working hand in hand with the Octa-core MediaTek MT6765 Helio P35 SoC processor which runs at (4×2.3 GHz Cortex-A73 & 4×2.0 GHz Cortex-A53). The processor is definitely not the trending 2019 flagship processor, but it is among the best considering the price in which the new smartphone arrives with.

The CPU is assisted by a PowerVR GE8320 GPU in charge of gaming and graphics. Meanwhile, for the storage, you are presented with only one storage option which happens to be the 6GB RAM and 128GB internal storage which can be microSD, up to 1 TB (dedicated slot).

The CPU  in the new smartphone is a 12nm architecture optimized with the Android 9.0 Pie and AI. The Tecno Phantom 9 runs with the latest Operating System which is Android 9.0 (Pie) based on the HiOS v5.0.

The Tecno Phantom 9 support for 4G LTE network and also uses dual Nano-SIM. It also comes with a handful of sensors such as a built-in electronic component that measures motion and tilt, accelerometer, and proximity sensor.

The Tecno Phantom 9 drives in with a good battery backup which can take you a whole day with moderate use. The new smartphone comes in with a Non-removable Li-Ion 3500 mAh battery.

Their battery didn’t come with exciting features apart from the conventional features. Unlike some 2019 smartphones which features a reversible charging tech, and wireless charging technology, the Phantom 9 can only be powered by a USB cord.

Despite coming in with lots of interesting specs and features, the Tecno Phantom 9 also happens to be a budget smartphone with a low price tag.

The new smartphone has a starting price of about $200 which is equivalent to 72,600.00 in Nigerian currency. Don’t get it twisted you might experience a slight shift in price either an upward or downward movement depending on your location and deal.

To buy the Tecno Phantom 9, walk into any authorized Tecno smartphone distributor or any credible online store and purchase the new smartphone.

Considering the price tag at which the Tecno offers their latest smartphone and the features which the new smartphone arrives with.

The Tecno Phantom 9 has a large screen with a great display, nice battery life, lightweight, quick response to commands, and more. If you want to a moderate smartphone that responses to all the commands that you input, then, the Tecno Phantom 9 should be added to your watch list.