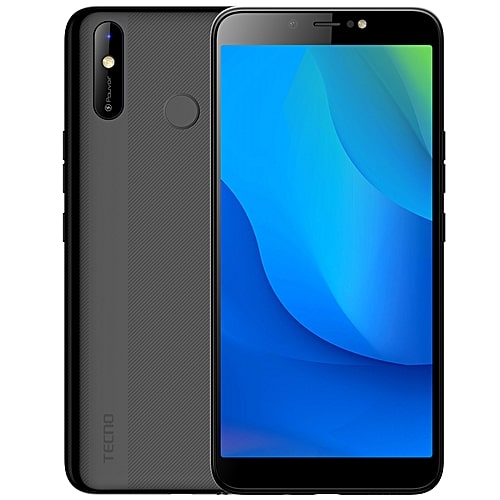 The Pouvoir 3 Air was actually produced to compensate users who are not able to offer the Pouvoir 3 but are still interested in the battery life.

Pouvoir means power in French and it’s also Tencno’s series of smartphones with huge battery life. But apart from power, the new smartphone comes in with other interesting features and specifications such as the current OS (Android 9 Pie Go edition), large display, and others which will be properly revealed in their appropriate sections in the course of our review.

The Tecno Pouvoir 3 Air was made of a glass front and a plastic body and aluminum frames. It rocks a different design from that of its predecessor and the Tecno Pouvoir 3 and you will observe the changes from the notch to other parts of the smartphone.

The new smartphone maintains the old TECNO mobile design. You will find a reasonable amount of bezels on the top and the bottom of the smartphone, while the sides are well-trimmed. The top bezel houses some sensors as well as the single selfie camera, LED flash, notification light, earpiece, and others.

The screen of the Pouvoir 3 Air is 6.0 inches FullView Screen Display with a resolution of 480 x 960 pixels. The display is okay, but the Tecno Pouvoir 3 display is much preferable than it.

You will find absolutely nothing on the left-hand side of this smartphone, meanwhile, the right side occupies the volume rocker and the power button only. The smartphone rocks the 3.5mm jack port which seated at the bottom of the smartphone where you also find the micro USB port for powering the battery of this smartphone.

The new smartphone comes in with three different color options which consist of the Champagne Gold, Aqua Blue, and Midnight Black.

The Tecno Pouvoir 3 Air does not have its cameras as its selling point, although they are okay for normal smartphone users. But if you are a selfie lover or the outgoing type who enjoys taking photos, then it’s better you go for the Tecno Camon series.

The Tecno Pouvoir 3 Air comes with a total number of two cameras all sporting an AI beauty camera lens. The single selfie camera is 8 megapixels and it also has a LED flash for better image even in low light conditions.

Meanwhile, the back also rocks an 8-MegaPixel camera sensor also with a LED flash that will also assist to take good pictures in low light. Some of the features of the cameras include LED flash, HDR, panorama, Face Unlock and Face ID.

The Tecno Pouvoir 3 Air houses a 2.0GHz Quad-core processor which is in charge of the performance of the smartphone. It is assisted by the PowerVR GE8100 GPU which handles the graphics and gaming section on the smartphone.

You will also find the 1GB RAM which assists the smartphone in so many things such as the multi-tasking and others. The 1GB RAM is modest compared to recent smartphones but with the latest lightweight Android 9 Pie (Go Edition), loaded performance is expected to be good.

For storing your personal files and other media and files, you are presented with a 16GB internal memory storage, which most people find to be quite disappointing. But notwithstanding, you can further expand the storage up to 64GB via the memory card slot that has been provided.

Just like the premium version, the Pouvoir 3 Air arrives with dual Nano-SIM slot, which both supports 4G LTE network. For security, you have the Fingerprint Sensor, Face Unlock and the speedy Face ID Unlock which allows users to instantly unlock their smartphones.

The fingerprint scanner, just like the Face ID Unlock is very responsive and allowing you to quickly unlock the smartphone with just one touch.

You will also enjoy Radio programs and music with the earphone modes, and speaker with a great sound. Unlike most smartphones, you don’t need to plug your earphone before you can enjoy your favorite radio program.

The new device still maintains an outstanding  5,000 mAh battery capacity just like its the Tecno Pouvoir 3. The endurance rating of this smartphone’s battery is something far different from the usual. You are sure to get up to 4 days of moderate use just like the Tecno L9 Plus. You will easily get 22 hours of video streaming, and a whopping 42 hours for call time.

We earlier mentioned that this smartphone is for those who can’t afford the premium version. We are therefore not expecting it to be coming with a high price tag and it didn’t disappoint us.

You can easily purchase the smartphone from some online stores or any authorized Tecno distributors near your region.

Metilcouls reading of this article on Tecno Pouvoir 3 Air Review, you would observe that the Tecno Pouvoir 3 Air is a budget smartphone which comes in with a moderate specification and features. It was originally produced for those who couldn’t afford the premium version but still really want to enjoy the large battery life.

Just like we mentioned, the Tecno Pouvoir smartphone series is here to address power problems. If what you want is a smartphone that can answer to your moderate daily task and also offer a very large amount of use time, then the Tecno Pouvoir 3 Air should be added to your consideration list.

But, if what you want is a smartphone that offers both enough power and can go beyond carrying our just your everyday task, then you can easily try the premium version.