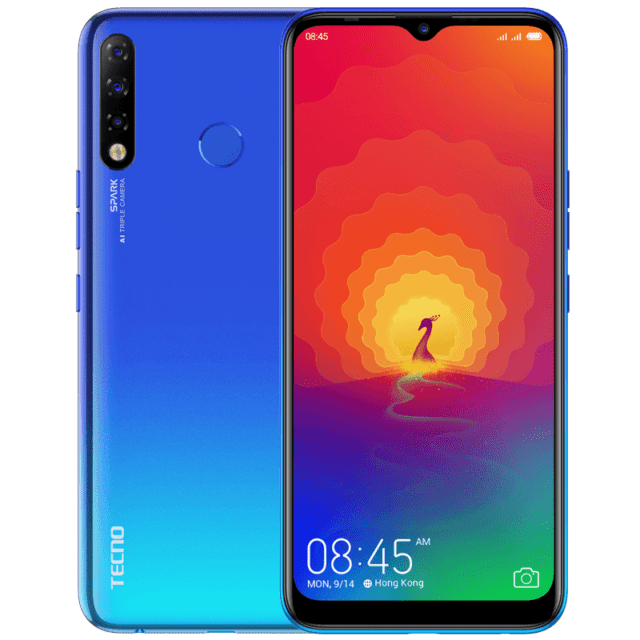 Despite arriving with lots of interesting high-end specifications and features, the new smartphone was still able to maintain a low price tag which qualifies to be among the best budget smartphones.

In this article, we will be reviewing and presenting to you everything you need to know about this smartphone. We will also be listing out its weaknesses and strengths, as well as the reasons you need to buy this smartphone and other reasons why you shouldn’t.

At the end of it, you will be the one at the driver’s seat to decide whether you need this smartphone or not.

The design of the Tecno Spark 4 is simply amazing bringing in those fascinating trends such as the waterdrop notch, AI triple primary cameras and more.

Tecno Mobile was able to use a plastic body, an aluminum frame, and a glass front to put up the Spark 4. The frontside of the Spark 4 is covered with a large 6.52-inches, IPS LCD display with a resolution of 1600 X 720 pixels (269 PPI).

On the front side of the smartphone, you will find well-trimmed bezels, apart from the bottom bezel which is a little bit obvious than the others. On top of the 6.52-inches screen lies the waterdrop notch which houses the single selfie camera alongside other things like the earpiece which happens to be on top of the selfie camera and other sensors on the notch.

On the back of the Spark 4, resides some of the interesting features such as the triple AI cameras vertically positioned with the powerful LED flash placed below the camera module.

Still, on the back of the budget smartphone, you will see the responsive fingerprint scanner above the center, close to the top.

The other component such as the volume rocker and the power button are on the left side of the smartphone. Meanwhile, the USB port, the 3.5mm jack, the smartphone’s loudspeaker are all at the bottom of the Spark 4.

You can easily locate the micro-SD card slot and the SIM card tray on the left side of the phone. Tecno Spark 4 arrives in four (4) color variants. You have the option to decide either to go with the Blue color, Grey, Purple, or Red color option.

The Tecno Spark 4 might not have come with exactly the same quality of cameras that is mostly found in high-end smartphones these days, but they were able to deliver something that gives you the same feel.

The features Tecno delivered in the camera section is less of a gimmicky. We were happy to find a triple camera on the back of the budget smartphone. It shows a sign of improvement since the Tecno Spark 3  and the Tecno Spark 3 pro both arrived with just dual primary camera shooters.

The Triple primary camera setup found on the Spark 4 are AI-supported and comprises of a 13MP primary shooter with an F/1.8 aperture, 2MegaPixel camera for depth sensing, and a QVGA camera.

Powering the Tecno Spark 4 is still the same Quad-core MediaTek Helio A22 chipset which runs at 2.0GHz. Don’t get it twisted, the chipset is capable of taking you through all the basic performance such as light gaming, surfing the internet and more.

Both models run on the latest software, the HiOS 5.5 the company’s software which is based on Android 9.0 Pie. There are currently no words whether the Operating System will be upgraded as of the time of writing. Spark 4 supports the 4G Network as well as the 2 and 3G networks.

The battery segment is another place that the Spark 4 experienced an improvement over its predecessors. Powering the spark 4 is a huge 4000 mAh Non-Removable Li-ion Battery which is sure going to take you through the day even with a heavy usage.

It didn’t come as a surprise for us not to see the Wireless charging tech on this smartphone considering the price in which it is sold for as well as the plastic body build.

Nevertheless, we were a little bit disappointed not to see the smartphone arrive with a fast charging technology which you can easily find on most mid-range smartphones. So, don’t expect any speed up charging because you will be disappointed.

One of the things that made me first fall in love with the Tecno Spark 4 is its low price tag. The Spark 4 comes in two models both shipping in with their own price.

The Tecno Spark 4 does not feature many upgrades from its predecessor, but it’s still worth the price at which it comes with. At least you have an improved power supply, triple cameras, waterdrop notch which holds the selfie camera and other amazing specs and features for a small fee of about N38, 000. For me, I think it’s a win-win.