Xiaomi Redmi Note 9S is among the ninth generation smartphone of Xiaomi. It arrives with lots of interesting specifications at an affordable price. It features an all-around improvement beginning from the camera down to the battery, and design.

The new device which was announced on March 23 and expected to be released on April 30th, 2020, offers more than enough impressive features for your money.

I strongly have a feeling that the Redmi Note 9s is the smartphone Xiaomi intends to use in breaking into the global market.

I’ve spent about one week with the Redmi Note 9s even before it was announced. Below you will find an in-depth review and our honest verdict. You can either stream my video review or continue reading or do both. Enjoy!

If you decided to read, then let’s jump right straight to providing you with the strengths and weaknesses (If any) of the Redmi Note 9s.

Even before opening the Redmi Note 9s, you will find a quick review of the specifications and features on the body. A white paper that looks like an envelope is the first thing you see when you open the box. Open the paper and you’ll see the SIM ejection tool, leaflet, and grey smartphone case.

After that, you will see the Redmi Note 9s itself and when you move down to the third layer of the smartphone, you will find the adapter charger. Finally, you have the 2.0, Type-C 1.0 reversible micro USB cord.

Apart from the plastic frame on the Redmi Note 9s, the front and back is made up of a Gorilla Glass 5 and a splash-proof (P2i nano-coating technology). The Redmi Note 9s also has beautiful trendy curves and flashy paint jobs. 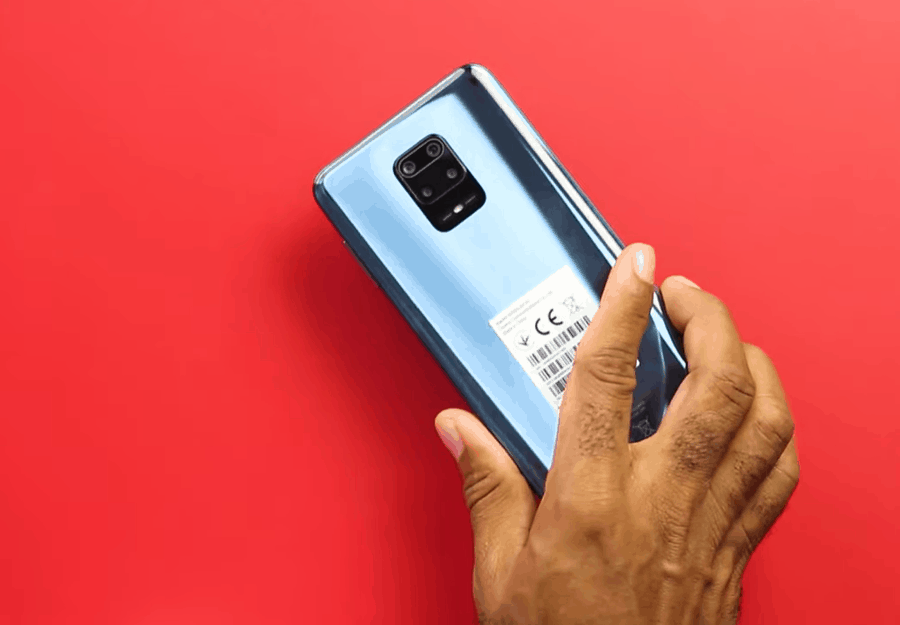 There are no annoying bezels on the Redmi Note 9S, but rather it packs a huge 6.67″ IPS LCD screen surrounded by very thin bezels.

Actually, the display of the new device is a punch hole where you find the single selfie snapper. At the top of the display sits an almost invisible earpiece grille, alongside a super tiny white notification LED.

Must Read: 7 Best Android Accessories of 2020

Redmi Note 9S back features a Gorilla Glass 5 with a neat paint job. You also find the quad-camera at the back residing within a small but humping sharp square. There’s a black accent paint used on the hump sharp square that goes a little bit beyond the camera square downwards towards the LED flash.

There are only two things you will find at the top of the Redmi Note 9S – A microphone and an IR blaster. On the left side of the device houses just the tray which contains dual SIMs and a microSD card. Meanwhile, the button of the device holds the loudspeaker, microphone, a micro USB cord, and a 3.5mm jack.

Also, the display supports HDR10, which means it can display 1080p HDR content from movie streaming sites like Netflix and more all thanks to the Widevine L1 DRM support.

One of the things I didn’t like about the display was the uneven backlighting around the round notch which is easily seen on white background.

Upfront, the Xiaomi Redmi Note 9S ships with Qualcomm’s Snapdragon 720G which has been said to be an SoC targeted specifically at gamers. It is indeed a great match for the Redmi Note 9S. It offers a high level of performance and was able to outperform some competitors of the same price range.

The SoC uses an octa-core CPU in a 2+6 configuration. Meanwhile the GPU in this chip is an Adreno 618 which is exactly the same found in the Snapdragon 730.

Lastly, the Snapdragon 720G is built on an 8nm manufacturing process which happens to be one of the most efficient processes available, currently.

Xiaomi decided to use the latest version of MIUI 11 under the hood and it runs on top of the latest operating system, the Android 10 OS. This offers you more features like the Dark mode which switch all system colours from white to black.

Powering the Xiaomi Redmi Note 9S is a large 5,020mAh Li-ion battery that has support for 18W quick charge. Luckily, the device arrived with a 22.5W brick which Xiaomi says it’s one of their universal chargers for smartphones, tablets, smart home accessories, and even small laptops.

With the charger you can get about 37% of the entirely depleted battery in 30 mins, while 60% in 50 mins. It takes about 1 hour and 45 minutes for a full charge.

The Redmi Note 9S cameras is another strength of the smartphone, but first, let’s begin with the back. The back of the features a camera setup that we are already familiar with – The same Redmi Note 8T camera setup.

It is a square bump at the back that accommodates four cameras which comprises of a 48 MP sensor with an f/1.79 aperture – the main camera which features a Quad-Bayer filter, likely the ISOCELL Bright GM2 sensor by Samsung.

The second camera is an 8MP ultra-wide-angle camera sensor with an f/2.2 aperture. Also, the third is a 5MP macro camera with f/2.4 aperture and a 1.12µm pixels. And finally, we have the 2MP depth sensor which is the last one.

For all your wild selfie ecstasy, you have a single 16MP selfie which produces good photos though not the best we’ve seen. Other features of the camera include a LED flash, HDR, and panorama features.

Like I mentioned above, the Xiaomi Redmi Note 9S will be available by the end of April 30th. For the basic model which is the 64GB storage with a 4GB RAM, you are going to pay about $200.

Meanwhile, the bigger version which is the 128GB internal storage with a 6GB RAM, you should be willing to pay about $?240.

You can easily purchase the Xiaomi Redmi Note 9S from some online stores such as Amazon, eBay, Alibaba, etc.

Long before now, I already expected nothing less from Redmi phone anyway. And luckily, it didn’t disappoint me. It is arguably the best smartphone within its price bracket. And, even though other great phones like the Realme 6 offer a smoother OS experience with its 90Hz screen at the same price range, the Redmi Note 9S still offers more than enough bang for its buck.