Snapchat has become notable for representing a new, mobile-first direction for social media, and places significant emphasis on users interacting with virtual stickers and augmented reality objects. As of the first quarter of 2019, Snapchat has 190 million daily actives. But let’s leave the platform and focus on the American Internet entrepreneur who was responsible, alongside others, for its existence. Check out our list of the 17 Things You Didn’t Know About Snapchat’s Co-founder, Evan Thomas Spiegel: 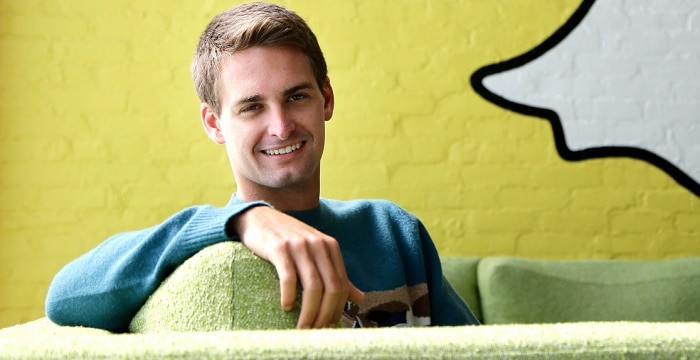 1. Evan Thomas Spiegel came into the world on the 4th of June 1990 in Los Angeles, California.

2. His parents are Melissa Ann Thomas and John W. Spiegel, and they both practice law.

3. Evan Thomas Spiegel had his childhood in Pacific Palisades, California, and this was where he was raised Episcopalian.

4. He got his education in Crossroads School for Arts and Sciences in Santa Monica and Stanford University.

5. Evan Thomas Spiegel partook in design classes at the Otis College of Art and Design as a high school student and also at the Art Center College of Design in Pasadena before he enrolled in Stanford.

Evan was an intern at Red Bull, and he received no dime for it.

7. As a student, he got employed as a paid intern for a biomedical company, where he worked as a careers instructor in Cape Town, South Africa

8. Evan Thomas Spiegel was formerly a member of the Kappa Sigma fraternity.

9. 7 years ago, Evan exited Stanford University to concentrate on Snapchat before wrapping up his degree.

10. As he studied product design at Stanford University, Snapchat was proposed by him as a class project.

11. Evan Thomas Spiegel co-founded the app Snapchat alongside Bobby Murphy and Reggie Brown. He is the founder and chief executive officer of Snap, Inc.

13. 5 years ago, a Gawker blog shared some emails written by Evans during his undergraduate career to fraternity members. Evan later said sorry for his actions and attitude towards women when the emails were sent. His words were, “I’m obviously mortified and embarrassed that my idiotic emails during my fraternity days were made public. I have no excuse. I’m sorry I wrote them at the time and I was a jerk to have written them. They in no way reflect who I am today or my views towards women.

14. An ex Snapchat employee, Anthony Pompliano recently revealed in a statement that Evan once said Snapchat is “only for rich people” and he does not have to “expand into poor countries like India and Spain.” Evan responded by saying Anthony’s comments were absurd. He said “Obviously Snapchat is for everyone. It’s available worldwide to download for free.”

15. Evan started dating model Miranda Kerr 4 years ago. They met each other at a Louis Vuitton dinner in New York the same year. They got engaged on the 20th of July and got married in LA on the 27th of May 2017.

17. Evan is a member of the Berggruen Institute’s 21st Century Council.