By maryann4 Mins Read
Share
Facebook Twitter LinkedIn WhatsApp Pinterest Email
It’s not news who Tunde Onakayo is, when you mention his name, the first notable thing you might say about him is how he changed children’s lives in the slums with the art of chess.

Tunde Onakayo is a 26 years old Nigerian citizen, who grew up in Isale Odo community in Ikorodu, like many kids out there, he did not have access to a lot of things. 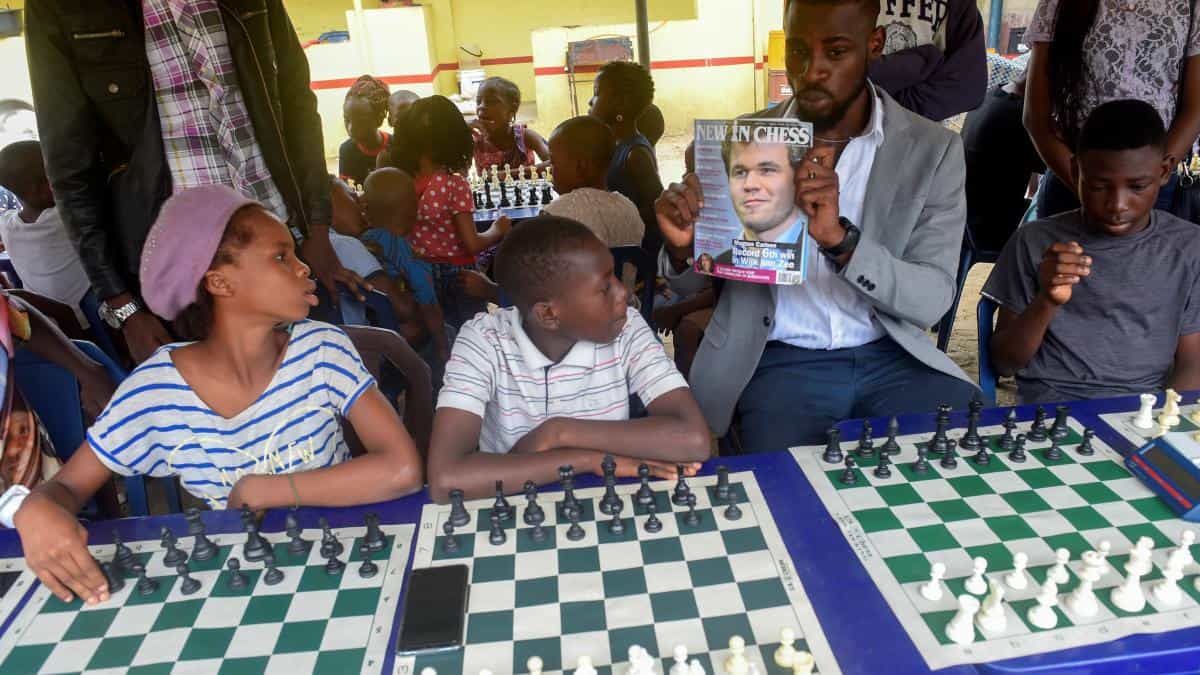 He came from a poor background, due to this, his family couldn’t afford to send him to a secondary school, this made him stay at home for two years, while his mum worked as a cleaner at Yintab College in Agric, Ikorodu, just so she could raise money and send him to school. During those two years when Tunde was at home, he learned how to play chess at a barbershop.

In 2015, Tunde graduated from school, and the question we all ask ourselves after writing our final paper is, what comes next? What do I do with my life after school? How do I make money and survive? Well, life didn’t treat him the best way possible, there was nothing concrete, he took part in piano plays in church and had few chess lessons.

What exactly was the turning point for Tunde?

He said he got the inspiration to start the initiative when he visited Majidun, Majidun, a slum community in the state of Lagos. He stated that his visit to the slum in 2018 opened his eyes to how children lived in the slum. He observed that most of the children were not growing up inappropriate environments because the area was unsuitable for them to live in, and that the majority of them lacked education and proper upbringing because the majority of their parents were thugs and cultists with no sense of responsibility.

He claimed to have returned to his childhood home and discovered that nothing had changed. There were still children living on the streets who lacked access to education. In a rapidly changing world, he feared that those children would never have the chance to realize their full potential.

Must Read: 10 Best Crossword Games For Your Android Phone

He began to consider what he could accomplish on his own. He was already a National Master of chess at the time, so he and my friends returned to the community with a few chess boards and began teaching the children chess as a way to get them off the streets, engage their minds, and teach them skills that would expose them to opportunities beyond the confines of their environment.

Tunde went on to say that if the children kept living in the slum-like this, they’d end up becoming like their parents. He mentioned that he considered teaching chess to these vulnerable children as a way to promote learning and intellectual development. He explained that it was his way of giving them new leverage because most of them couldn’t afford to go to school.

In the same year, he returned to the slum and obtained permission from the community’s head, who in turn provided them with a location where they could teach the children chess. He and his friends taught the kids chess, fed them, taught them, and took pictures with them. It was entertaining.

Just like every initiative, funding was difficult and even worse for Tunde, as he had little, but that didn’t stop him, the project was difficult due to his lack of financial resources, he began publicizing the movement on Twitter, but still had 0 or no impact. In 2022, a post went viral, which led to people volunteering and contributing to the cause. The initiative eventually went viral, resulting in appearances on BBC, CNN, and numerous other international news platforms.

According to Tunde Onakoya, the project is now at a point where it is attempting to spread and impact more children. He believes that chess has the potential to improve the lives of children in impoverished African communities. They don’t have to become chess champions, but they will learn to think and their horizons will broaden beyond their small communities. Chess in the slum has also secured sponsorship from international chess organizations. They have impacted the lives of 300 children in three years, with 30 of them receiving lifelong scholarships.

Not all superheroes wear capes, and Tunde is a perfect example of it.

Building A Successful SaaS Startup in Nigeria: Common Mistakes That Lead To Failure

Flutterwave Secures $250 Million in Funding, Tripling Its Valuation to $3 Billion