Pen to read, lets you write on your smartphone display, converting the written text into digital text, with selected handwriting. You scribble some letters on your smartphone display and Pen to read guesses the letter and turns it into digital text that is readable.  Pen to Read lets you write words by parts, after which it guesses a possible extension and offer options to continue. 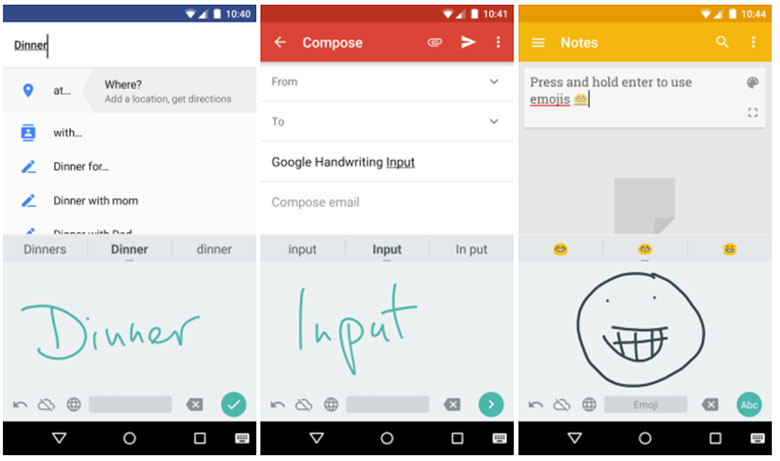 Unlike the Google handwriting input app, my script Nebo requires a stylus pen, it was designed to work effectively with the stylus.

My script Nebo turns the screen of your device into a digital note, allowing you to scribble texts, can be formatted. My script Nebo allows users to sync your notes with Google Drive or Dropbox.

Exclusive to iOS devices, Note plus is another great handwriting to text app. It lets you scribble letters, that can be formatted into digital texts.

Note plus supports about 52 languages. This means that the note plus can recognize letters from languages apart from English. Note plus also features automatic shape detection, allowing to identify shapes drawn.

Penultimate is another exclusive iOS app. It converts natural handwriting and sketching, to digital format. It lets you take the class or meeting notes, journal your thoughts and can also outline your best new idea and lots more. Penultimate can be synced to the Evernote app.

Exclusive on the Android platform, text scanner lets you scan notes, and turn them into digital contents, that can be edited. With its optical recognition system, you rest assured that the text scanner is going to scan all letter in the material.

As the name suggests, the Scan and scribe app, lets you scan handwritten notes, converting them to digital notes. Also, the Scan and Scribe apps allow you scribe characters, with your natural handwriting.

Scribbled letters can be formatted after creation. The scan scribe app is exclusive to the Android operating system.

Last but not least is the handwriting OCR app exclusive on the Google PlayStore. Handwriting OCR recognizes notes, whiteboards, and all forms of texts. Scanned texts can be converted to digital texts, which can be edited.

There you have it guys. You have just been served the list of best handwriting to text apps for both the Android and iOS platforms. As earlier mentioned. These apps will let you mimic the experience on notes, on the display of your device.