Meizu has finally released their 2019 flagship smartphone, Meizu 16s which is an upgraded version of last year’s Meizu 16. The new smartphone was announced in April and was also launched yesterday April 28 which means you can currently purchase one if you like what it offers. 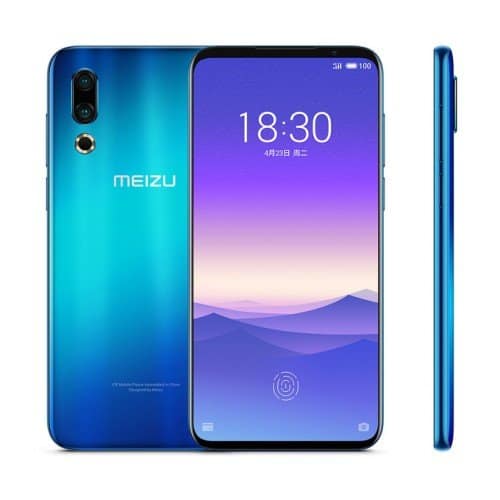 When it comes to the design of the smartphone you would notice that not much has been changed from the Meizu 16th except for few things like the absence our beloved 3.5mm jack and according to the company, this was done as in order for their large battery to properly fit in so, the smartphone can still maintain a slim profile.

There are so many things we have revealed about the Meizu 16s in this article, all you have to do is pay attention to see if the smartphone could be a good deal.

The Meizu 16s smartphone features the COF bonding technique design, and this is the reason for the large-radius corners which surrounds the smartphone.

On top of the screen, you will find the new generation bezel (a very small bezel) which Meizu managed to put both the selfie camera, earpiece, and sensors. You will still find the new stereo speakers which were built-in mEngine 3.0 and also features an outstanding vibration effect.

Meizu boasted of collaborating with Samsung to produce a high-quality display which is centered on reducing the harmful effects on the eyes of their users.

On the back of the smartphone, you will find the dual camera sensors which are vertically aligned with a LED flash beneath. Don’t bother searching for the fingerprint sensor at the back of the device because it is now under display (In-screen fingerprint).

We earlier mentioned that this smartphone didn’t come with the 3.5mm audio jack, nevertheless, Meizu is selling Type-C to 3.5mm converter which arrives with the Cirrus Logic CS43131 Hi-Fi DAC and promises to offer the best audio experience.

The new smartphone arrives in beautiful colors, they are actually three in number and they consist of the Carbon Black, Pearl White, and the Phantom Blue color option.

The Meizu 16s arrives with a total number of three cameras with two serving as primary cameras at the back of the device, while the single camera sensor serves as the selfie camera (Secondary camera).

Meanwhile, on the front of this smartphone, you will find the selfie camera seated bezel. It is a single 20-megapixel sensor with an f/2.2 aperture (wide-angle lens). It comes with features such as the AI face recognition, ArcSoft beauty algorithm support, portrait blur, and HDR.

The cameras arrive with nice features such as the Meizu’s “Super night view” which joins 8 images into one image for improved low light photography. It also comes with the multi-frame noise reduction.

The processor is assisted by Adreno 640 GPU which is in charge of the graphics performance and it allows users to play games with intensive graphics while still producing great graphics.

The smartphone supports Hyper Gaming smoother graphics performance and the good thing is that it doesn’t consume much power still.

The smartphone runs on the company’s Flyme 7.3 which is based on the Operating System, Android 9.0 (Pie).

Powering the Meizu 16s is a moderate Non-removable Li-Po 3600 mAh battery which also comes equipped with a 24W mCharge fast charging Technology. You can use the USB Type-C port to add extra battery juice.

We earlier mentioned that the new smartphone comes in three different configurations which means they should also come with different price tags. The starting price for the base model which is the Meizu 16s with 6GB RAM and 128GB storage is sold for CNY 3,398 which is also equivalent to Rs. 35,200 / $505.

The new smartphone is a nice one to try. It comes in with interesting specifications and features such as the powerful cameras with Sony IMX350 sensors. The smartphone also arrives with a moderate battery life accompanied by a fast charging technology.

Check Out Meizu Pro 5 Specs And Price in Nigeria