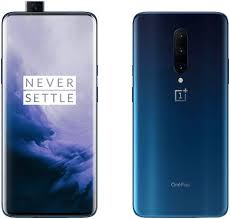 The smartphone brings along two powerful features, the pop-up selfie camera which takes portrait shots and the unblemished all-screen display. These two features are something we don’t see on either Samsung and Apple’s market-leading flagship phones.

Notwithstanding, the two features are not all that the new smartphone has to offer. In the course of our review, we will outline all the features and specs of this smartphone, so you decide if the smartphone is worth throwing your hard earned money at.

The 7 Pro looks like the Galaxy S10 Plus, though without a punch hole, it has the same design language. It features all the basic design you could possibly find on a smartphone in 2019.

The smartphone has a glass build back and fronts, while the frames are made of aluminum. The screen is a 6.67 inches Fluid AMOLED display with well-curved edges. It has a resolution of 1440 x 3120 pixels alongside an aspect ratio of 19.5:9 with a Corning Gorilla Glass for protection.

The smartphone didn’t come with the 3.5mm jack just like some newly released smartphones. On the back of the smartphone, there are triple centrally placed camera sensors. The cameras are arranged vertically with a LED flash beneath the setup, as well as the company’s logo.

The OnePlus 7 Pro appears in three different colors which consist of the Mirror Grey, Almond, and Nebula Blue.

When it comes to the camera performance, the 7 Pro also delivers well. There are triple cameras on the back, while the motorized pop-up selfie is a single shutter.

The triple camera setup consists of a 48-megapixel sensor with OIS (optical image stabilization) and f/1.6 (wide) aperture. The second is the 8-megapixel telephoto sensor with 3x zoom, OIS, and Laser/PDAF. Finally, the third sensor is the 16-megapixel ultra-wide angle sensor with an f/2.2 aperture and an impressive 117-degree field of view.

The company endeavored that their hardware where all put to good use, with the smartphone arriving with the company’s enhanced Nightscape (version 2.0) scene mode. It also features the pixel-binning technology; the combination of four pixels image data into one to reduce shake and noise.

The Motorized pop-up selfie camera is a 16-MegaPixel with an f/2.0 aperture, 25mm (wide), as well as the Auto-HDR feature. The cameras were able to capture impressive shots, though there are other smartphones with better camera offerings out there.

One of the taglines of the OnePlus 7 Pro is labeled ‘Go beyond speed’ which means this smartphone focuses more on performance. The smartphone is among the fastest smartphones we have comes across just like the LG G8. The new smartphone is nearly as fast as the Samsung Galaxy S10 series.

Under the hood, the new smartphone arrives with the Snapdragon 855 chipset with a nice boost in clock speed. The device also comes in three different RAM configuration which comprises of the 6GB RAM with 128GB storage, the second is the 8GB RAM with 256GB storage.

Finally, the biggest model is the 12GB RAM with 256GB storage. There is no room for further storage expansion, as you are stuck with whatever storage model you purchase. The performance was lag-free as we were able to both run various apps in the background while watching videos and downloading all at once.

The 8GB RAM will be okay for all your smartphone requirements. The smartphone is in fact, the first smartphone in the world to feature the faster UFS 3.0 read/write speeds.

The smartphone uses the company’s OxygenOS 9.5.7 software which is based on the Android 9.0 (Pie) Operating System. There are lots of other interesting features that this smartphone arrives with and some of them includes the 10-layer liquid cooling system underneath the glass, preventing the smartphone from getting hot.

It also arrived with a built-in screen recorder which captures things happening on your display. For instance, you can decide to come up with a play-by-play video tutorial and you are also allowed to either record external or internal audio.

The 20-minute digital break feature, Zen Mode restricts you from accessing your smartphone for about 20 minutes. You are only allowed to take photos, receive and make calls.

The 7 Pro battery is quite interesting from the sheet, but when it comes to reality, it’s a moderate battery. The battery is a Non-removable Li-Po 4000mAh battery which lasted 10 hours during our continuous web-surfing, Gaming, and Video playback.

One of the additions to the battery is its Fast battery charging 30W (Warp Charge), which is capable of delivering an extra 60% battery juice within 30 minutes. Within 1 hour, you coin out up to 93% from 0%.

It also came to our notice that there will be an Almond version of the 7 Pro. The new smartphone is the most expensive and most diehard OnePlus fans don’t seem to be comfortable with that. It is more expensive than even the OnePlus 6T, though it is worth it.

Before choosing the OnePlus 7 Pro you have to access what your priorities are. This smartphone is for you if what you want in a smartphone is entertainment, then you have the all-screen display. The smartphone is also less expensive considering the features it offers. It also comes with eye-catching features like the mechanized pop-up selfie camera.

Nevertheless, if what you want in a smartphone is a blameless and powerful camera, then try something different. The cameras of this smartphone offer great shots, but if you want a much-improved smartphone, then the Google Pixel 3, Huawei P30 Pro or the less expensive Pixel 3a will do.

If you also want a small smartphone with less screen display, then you will have to try something else. The smartphone has a 6.67-inch display kind of large if you don’t want a big smartphone. Lastly, if you want a budget smartphone, we are sorry this device is not a complete budget smartphone.