2019 seems to be the year for Samsung as the company continues to dish out divers smartphones. The smartphone makers have also come announced another smartphone, Samsung Galaxy A20 which is said to arrive soon. 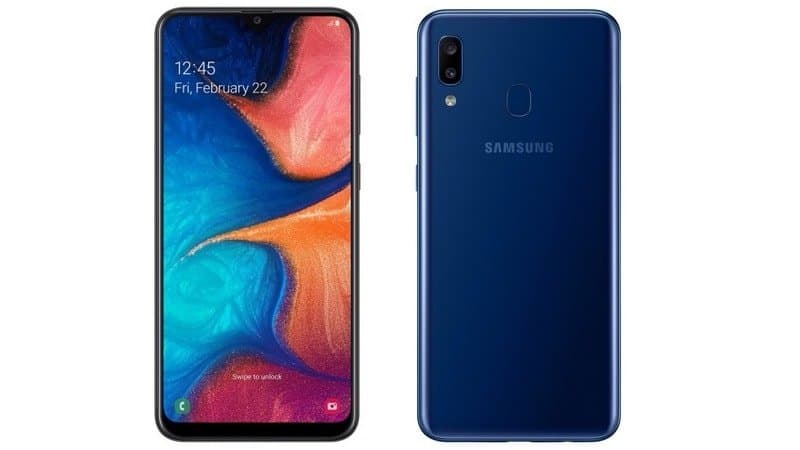 The Samsung Galaxy A20 was announced in March 2019 in Russia. The smartphone comes prepared with so many awesome features like its Infinity-V display, huge battery life and so many others that will be revealed to you as you continue reading.

South Korean tech giant, Samsung intends to expand its A series by introducing the new smartphone. The A-series was recently launched alongside the M-series. Without taking much of your time, follow us while we show you all the selling point

Under the hood, the newly announced smartphone has some similar design pattern with the Tecno Camon iSky 3. The new Samsung Galaxy A20 features a large 6.4-inch HD+ notch display.

The latest member of Samsung’s 2019 Galaxy A-series device, the Samsung Galaxy A20 uses both the glass and plastic which the company calls the   “3D Glasstic design”. The smartphone comes with a jumbo screen size of 6.4-inch HD+ (720×1560) Super AMOLED panel. The new Samsung smartphone comes with the Infinity-V display.

This time around the new Samsung smartphone arrives with well-trimmed bezels that surround the screen, nevertheless, you will still find the chin that is located at the bottom of the device.

On the back side of the new device, there is a dual camera setup which is vertically placed. The camera also has a LED flash which will help take brighter and well-detailed pictures that gives the images. The back still holds the fingerprint sensor which is placed at the upper region.

On the front of the Samsung Galaxy A20, there is a nice single camera which is seated on the large screen. The smartphone comes in just two colors which are black and blue.

Where are all the selfie lovers and photo freaks in the house, this is the section for you. The Back of the Samsung Galaxy A20 houses dual cameras which comprise of the 13 Mega Pixel, with an f/1.9, 28mm (wide) and the 5 MP, with an f/2.2, depth sensor.

The back camera also has a powerful LED flash which will also help to take clear images even in a low light condition. The camera also has featured the panorama and HDR.

The front of the smartphone is a single 8-megapixel selfie camera which has an f/2.0 aperture. The cameras are quick to respond and produce clear images.

Under the hood, the Samsung Galaxy A20 arrives with the Exynos 7884 SoC, the same which was featured on the Galaxy A10. The chipset runs at 1.6GHz while the six efficiency cores clocks at 1.35GHz.

The smartphone arrives in just a single model which is the 3GB worth of RAM for processing things and the 32GB internal storage which will handle storage matters. The smartphone also runs on Android 9.0 (Pie).

We know most people will be complaining about the small storage, but the good news is that you can actually increase the storage. The storage can be expanded up to 512GB using the microSD card.

The battery of the Samsung Galaxy A20 is one of the large and powerful batteries that has been manufactured the phone makers. The battery capacity is 4,000mAh which may likely be accompanied by a wireless charging technology.

The company is yet to say when they will be actually dishing out the new smartphone, but as soon as the smartphone is being issued out officially, we will let you know the stores where you can purchase the device.