Here comes one of the most rumored Samsung smartphone, which was able to be the topic of the whole internet after it leaked. 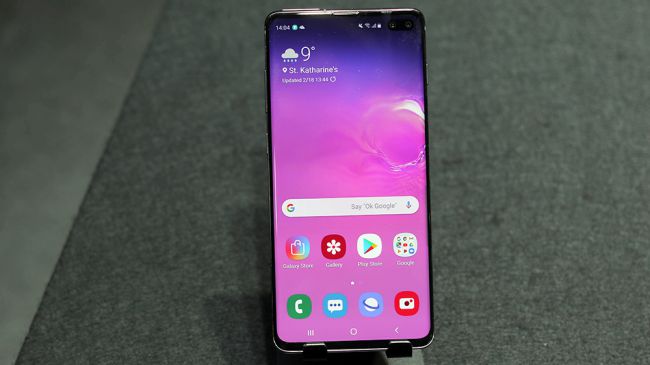 This smartphone is blessed with an abundance of unique features that are going to be revealed in their appropriate sections; so Without beating around the corner let’s see all the selling point of this smartphone.

When it all boils down to plan, the Galaxy S10 Pro has a beautiful look from first sight. The new device comes in with thinner aluminum frames that are better and well-trimmed than the S9. The method still maintains those smooth glass – in most versions

The Ceramic body build is only reserved to the highest-tier which 128 S10 Plus. This smartphone comes in with beautiful colors that range from the Prism Black, Flamingo Pink, Prism White, Prism Blue, Prism Green, and finally the Canary Yellow.

On the back side of this device, you will find a small bump that contains the triple camera sensor and below it is the reverse wireless charging module. The Android smartphone also comes with a feature called the PowerShares which allows your device to be able to share some extra battery life with friends and families using any Qi charging the phone.

On the front of this device, you will find the screen with an in-display fingerprint sensor. This smartphone also arrives with our lovable audio jack and the USB-C port.

When we talk about the cameras of this device, there are lots of goodies that it offers. The Samsung S10 Plus just like the Galaxy S10 also comes in with the triple rear camera which seems to be the trend of the day.

The triple camera setup is made up of a 12MP conventional lens, another 12MP optically zoomed, and the last is an addition and finally, a 16MP ultra-wide lens. At the back of this smartphone, there is also a flash LED light that will also assist to offer you a sharp image.

There are other features of the back cameras like the ability to record in HDR10+ and offers Digital Video Stabilization. Meanwhile, the front of this device houses a dual camera setup which is made up of an 8MP and 10MP. The 8MP is actually for depth sensing and taking of better portrait photos.

When it comes down to the production of this smartphone, it is capable of confidently competing with some of the best gaming smartphones. Under the hood, the Galaxy S10 plus arrived with the Snapdragon 855 or latest Exynos chipsets and this is dependent on the region you reside.

We are witnessing the first smartphone to feature the next-gen Wi-Fi 6, which allows you to change between Wi-Fi routers. It has also been said that it is four times faster than the 802.11ax standard. When you compare it with the S9, it is 20% faster, though you will need a router to get any use out of this feature.

Samsung employed one of the features that we love so much the PowerShare, which allows you to share your battery juice with your family or your battery-drained friend. The back of the Samsung S10 plus serves as a source of power to any Qi smartphone.

Under the hood, the Galaxy S10 pro ships in with a jumbo size  4,1000mAh battery capacity. To further make the Galaxy S10 a compelling smartphone, the company also added the wireless and fast charging technology on this device.

My last words concerning the Galaxy S10 Plus is that the device one of the most amazing gadgets that have ever been produced in 2019. The presence of this device has come to robe off the shine of the last few generations of Samsung handsets.

This smartphone also boils in with triple camera lens just like the S10, and they offer ultra-wide photos. The 6.4-inch screen has a hole on the top right side of this device where the selfie camera. You also have the on-screen fingerprints which were very responsive, and their also the Wireless PowerShare which will be more enjoyed by your battery-drained friends

How to Force 4G LTE on Samsung S9 and Note Devices