South Korea smartphone producing giant, Samsung has announced the arrival of another Galaxy XCover new family member, Samsung Galaxy Xcover 4s. The rugged smartphone was announced this June 2019 and will be arriving in July. The new smartphone was built in line with the U.S. military’s MIL-STD 810G standards for ruggedness. 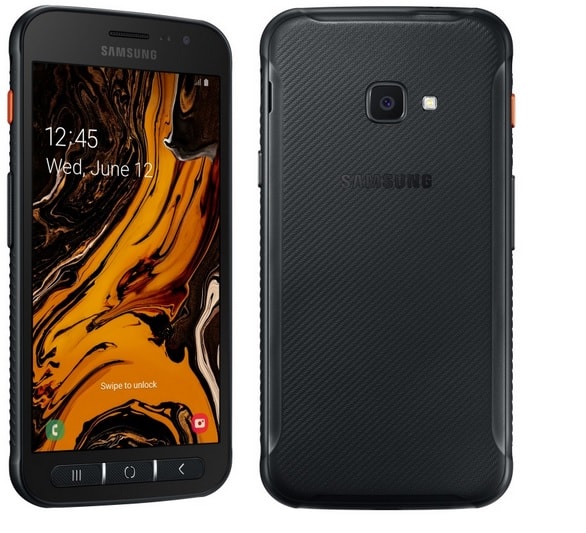 As a matter of fact, the new device design to operate smoothly in a harsh environment where other smartphones like the Galaxy A or Galaxy S cannot survive. Apart from the IP68 water and dust resistance certificate, the smartphone features moderate features and specifications.

The strongest point of the Samsung Galaxy Xcover 4s seems to be its strong body build. Let’s see some of the other interesting specification and features of the

Featuring an aesthetic design seems not to be the major purpose of this smartphone; it centers more ruggedness than beauty. Samsung Galaxy Xcover 4s features a more rugged build approach than the conventional smartphone.

The body of the device features a rubber coating all over, which will enable the device to resist any impact from bumps and drops. Like we mentioned earlier, the smartphone was built in line with the ruggedness of the U.S. military’s MIL-STD 810G standards.

The front of the device holds a very big notch that houses the selfie camera, earpiece, and other sensors. You will find the moderate bezels by the side, while the large bezel on the base holds the ‘Home Button’, ‘Minimize Button’, and ‘Back Button’.

There is no fingerprint sensor on this smartphone, meanwhile, the back houses just the single primary camera and a LED flash beside the camera. On the right side of the smartphone, you will find the XCover button which you can actually customize to launch a particular feature or app.

Must Read: Samsung Galaxy A80 Review – Specs, Features, and Price

We were not given many choices when it comes to choosing the color of the smartphone, we are only stuck with the Gray color option.

There are only two cameras on the Samsung Galaxy Xcover 4s, single primary and single secondary camera.

Like we mentioned earlier, the notch houses the single 5MP selfie camera with an f/2.2 aperture. Though the camera may not be the strong point of this smartphone, yet it delivers a moderate camera performance.

Must Read: Samsung Galaxy A50 Review – Specs, Features, and Price

For the primary camera, we have 16-MegaPixel with an f/1.7 aperture, PDAF. It also features a powerful LED flash which aids in capturing decent photos even in a low light condition.

The primary camera supports quick start which allows you to take photos quickly by pressing the Home button twice. The primary camera is capable of recording video of [email protected] and also comes with few features like the HDR, and panorama.

The Samsung Galaxy Xcover 4s delivers a moderate performance and comes in with average specs. For the start, the smartphone features the Exynos 7885 (14 nm) chipset and is also powered by an octa-core processor which runs at 1.6 GHz.

For your gaming purpose and graphics performance, you have the able Mali-G71 MP2 GPU. The processor is assisted by a 3GB RAM for multi-tasking and you also get a 32GB internal storage. The memory can be expanded up to 512GB using the microSD card.

Also, the Samsung Galaxy Xcover 4s runs purely on the latest Operating System, the Android 9 (Pie) out of the box.

There is nothing really special about the battery of the Samsung Galaxy Xcover 4s. It doesn’t support fast wireless charging, neither does it support fast battery charging.

Powering the new smartphone is a Removable Li-Ion 2800 mAh battery which can offer you a moderate amount of hours with moderate use. You can add battery juice to the smartphone using the USB 2.0 Type-C 1.0 reversible connector.

The rugged Samsung smartphone, Galaxy XCover 4s comes available in just one model. The smartphone is expected to be sold for around €299.99 which equivalent to $338 converting to N121,600 naira.

Samsung announced that the smartphone will first be available in Italy from July next month.

We always suggest whenever you want to purchase a smartphone it is important you know your reasons. The Samsung Galaxy Xcover 4s is a smartphone that derives its glory from its ruggedness.

Apart from the ruggedness, every other specs and feature are just moderate features we see on conventional smartphones. The smartphone brings along an Exynos 7885 chipset, 5.0 inches screen, Removable Li-Ion 2800 mAh battery and other normal features.

Nevertheless, if what you look out for in smartphone centers on a strong build, and to carry out the basic task, then you can add this smartphone to your watch list.