Vivo has finally released their much-anticipated smartphone called the Vivo X50, an upper-mid-range Android smartphone with so much to offer. It was announced on the 1st of June and is expected to be available on the 6th of June.

I will be providing you with the features, specifications, the pros, cons. I will also be offering a final verdict, which will be a summary of my thoughts on this Vivo smartphone.

When it boils down to design and body build, the Vivo X50 employes quality materials and high-end premium design. As a matter of fact, the new device uses a glass back and front while the frame is made of aluminium.

The glass back is home to the primary quad-cameras that are vertically placed. You will also find the Vivo logo and a Led flash close to the camera setup. 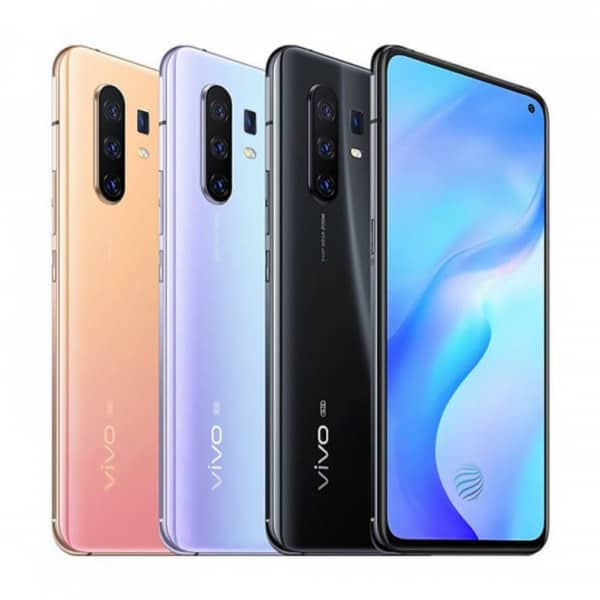 Flipping this device over, you will see the 6.56 inches display that dominates the front of the Vivo X50. It’s actually a punch-hole display which is becoming common in recent times. The punch, slim bezels, and ultra-slim chin make it possible for the smartphone to achieve an 87.0% screen-to-body ratio.

The punch hole on the screen houses the single selfie camera. One of the things I like about the smartphone is the responsive on-screen fingerprint scanner – It’s quick and responsive.

Apart from the few changes, everything remains the same, you still got the volume rockers and power button on the right side of the smartphone. Meanwhile, the left and the bottom contains the Dual Nano SIM tray (Also contains the MicroSD Card) and the Micro USB respectively.

One more thing, you wouldn’t find any 3.5mm jack because it’s been ditched – I know lots of people may not be too comfortable with this new development.

For colour options, you have the Black colour option, the Blue, and finally, the Pink which will be loved by more women.

The 6.56 inches punch-hole display is an AMOLED capacitive touchscreen which produces vibrant colours. The display comes with a resolution of 1080 x 2376 pixels and also has 398 PPI density.

Other features of this amazing display include the HDR10+ and the 90Hz refresh rate which is so cool.

I was so happy to see the Vivo50 ship with the Funtouch 10.5 user interface which is based on the latest operating system, the Android 10. It also gladdened my heart to see the new device support a 5G network.

The performance of the VivoX50 was a breeze and overall, I was impressed with all the result I got from the performance.

The only thing that you may not really like about the internals of the VIvoX50 is its inability to support storage expansion. Thus, while trying to buy this device, it’s always advisable to you go for the bigger variant.

Powering the Vivo X50 is the Non-removable Li-Po 4200 mAh battery which is capable of offering you a full day use when fully charged.

The smartphone also supports 33W Fast battery charging using the 33W charging brick that has been provided in the box.

One of the most exciting things for me is the cameras on the Vivo X50 – They take good shots and ships with exciting features.

The rear houses a quad-camera sensor which consists of a 48-MegaPixel sensor with an f/1.6 (wide) aperture. It also arrive with features such as the OIS, and the PDAF.

The primary camera is accompanied by a LED flash for brighter photos even in low light conditions. Some of the features of the camera include HDR, panorama, gyro-EIS, it can also record 4K videos @30fps, as well as 1080p videos @30fps.

For selfie lovers, you have an all in one single selfie camera sensor that is capable of taking sharp images. It’s actually a 32-MegaPixel with an f/2.5 aperture and a 26mm (wide) sensor. The selfie camera can record videos of 1080p @30fps.

Just as we mentioned above, the Vivo X50 smartphone ships in two different models all coming with different price tags. The basic model which is the 128GB internal storage with an 8GB RAM sells for $524 this is equivalent to N203,300 naira in Nigeria.

Meanwhile, the bigger model which is a 256GB internal storage with an 8GB RAM sells for about $575 on Aliexpress. This price equates to about N223,100 naira in Nigeria.

The Vivo X50 smartphone is qualified to be placed at the upper mid-range smartphones. It has lots of things to offer to its users such as a great performance, sharp cameras, fast battery charging, and 90Hz refresh rate, though this doesn’t come at a platter of gold.