ZTE has announced the specs, features, and date of arrival of their latest smartphone, ZTE Blade V10 at the MWC 2019. The new smartphone seems to be targeted at bargain hunters, though the Blade series has long been known for offering nice smartphones with low price tags. 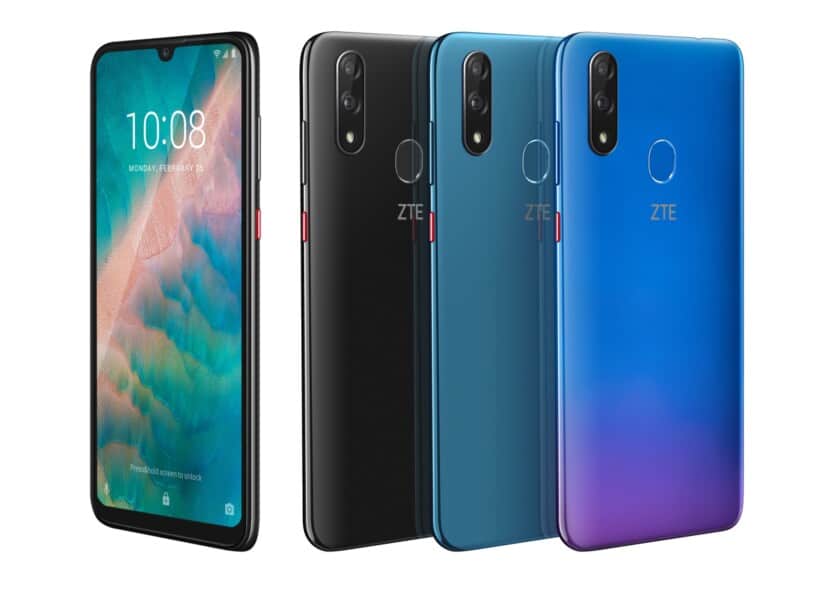 The new device was announced in February and is expected to be available before the end of March 2019. There are lots of impressive features that the new device ships in with which includes Smart Selfie and Scene Recognition, moderate battery, large screen, Dual LED flash, and more.

The new smartphone is one that centers more on the cameras, offering selfie lovers a new experience with its 32-MegaPixel. Let’s see everything the ZTE Blade V10 has to offer to its users.

The ZTE Blade V10 arrives with an aesthetic design which makes the smartphone look more expensive than it actually does. This time around the new smartphone arrives with the trending waterdrop notch. The notch holds the single selfie camera, while the bezels by the sides of the smartphone have been trimmed down.

The front side of the smartphone looks almost like an all-screen display apart from the tiny notch and bezels. The large screen on the front of the smartphone is a 6.3 inches IPS LCD capacitive display. It also comes with a resolution of 1080 x 2280 pixels and an aspect ratio of 19:9 (~400 ppi density). It was also able to boast a whopping 90.3% screen-to-body ratio.

The back of the smartphone is blessed with powerful dual cameras positioned by the left-hand side. Under the dual camera setup lies the LED flash which ensures decent pictures are taken even in low light conditions.

You will also find the responsive fingerprint sensor slightly above the middle with ‘ZTE’ logo beneath it. By the right side of the smartphone, you will find the power button and the volume rockers.

There is currently only three color options available as of the time of writing and they include the Black, Blue, and Green.

The ZTE Blade V10 is a selfie-centric smartphone and it comes with a total number of three cameras, two primary and a single selfie camera.

The dewdrop notch on the front of the smartphone houses a single 32-megapixel selfie camera sensor. It comes in with an f/2.0 aperture and also features a LED flash.

The selfie camera also integrates the ‘Smart Selfie’ AI technology out of the box. This means that blur from low-light images will no longer be an issue because the camera will automatically adjust the shutter till it best suit the situation.

Meanwhile, the dual primary cameras consist of a 16-MegaPixel sensor with an f/1.8 aperture. The second is a 5-MegaPixel shutter for depth sensing with an f/2.2 aperture.

The primary camera also ships in with AI scene recognition technology which can identify over 300 scenes in preview mode. It also comes with other features such as Dual-LED dual-tone flash, HDR, and panorama. It can also record videos of [email protected]

Coming to the performance of the smartphone, you will get Mediatek MT6771V Helio P70 (12nm) chipset inside the device.

The new smartphone runs on the company’s software, the MiFavor 9.0 which is an Android 9.0 (Pie) based Operating System.

We were not surprised when we couldn’t find any 5G LTE network, nevertheless, the smartphone came along with the 4G voice calling (VoLTE) as well as dual-band WiFi 5 (802.11ac).

Under the hood, we have the Non-removable Li-Ion 3200 mAh battery which ensures that there is enough power supply for the smartphone to carry out all its activities.

Though the actual price of the ZTE Blade V10 has not yet been officially released by their producers, we hear rumors that the new smartphone might cost around €200 / $226 / N81,300.

The producers also said that the smartphone will be released in some countries like Latin America, Europe, and China starting from March 2019, but before that time, there will be more coverage.

There is no doubt that the ZTE Blade V10 is a good smartphone, but it doesn’t offer anything special. The success of this smartphone may come from low price tag and software touches.

In light of the ongoing technology innovation, we expected to see something amazing and unique. The smartphone didn’t feature any punch hole screen, mechanized pop-up selfies, etc, there is virtually no landing ground for the ZTE Blade V10 and it might likely be swept away by other flashy smartphones, but overall the new smartphone is good.